If you have not watched the most recent episode of Outlander, please turn back down. Spoilers from the season and episode lie ahead. 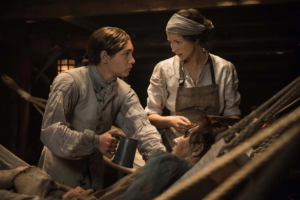 The episode opens from Jamie’s point of view just before the ship sets sail with Claire. Aww, Fergus calls Marasli– Marsi. That is so cute. I don’t think I recall him doing that in the books. Suddenly Jamie notices the boat sailing away. He looks through the spyglass and sees Claire arguing with the captain. Jamie yells for the captain of his vessel to go after her. The captain refuses and retaliates by putting Jamie in the brig after finding out who he is. I totally do not remember that happening in the book.

Claire is the “head cheese” on the boat when it comes to the care of the men. She runs a tight ship and takes no guff from anyone. The men do not like her because she is a woman and because she bosses them around. Thankfully, Mr. Pound always has her back. He tells the men to do what she says and given his rank they do as they are told. Claire spends her free time watching the horizon for Jamie and his boat. Mr. Pound suggests they distill the rum onboard even farther to make rubbing alcohol. The captain doesn’t really want to do that as he will have angry sailors on his hands when he cuts their rum rations. He eventually agrees because it will help to sanitize and kill the germs. Awww, Mr. Pound’s first name is Elias and he is only 14!! He has been sailing the high seas since he was 7. While helping Claire care for the sick he discovers that one of his friends that grew up in the same village as him has succumbed to the disease. Elias gently shuts his eyes. Claire is beginning to show the strain of not knowing how to get this sickness under control. Every day more people fall ill and die. Claire becomes even more determined to find patient zero. Through talking about the illness with the different people on the ship she discovers that patient zero is the galley hand. They quarantine him in the brig below the ship.

Jamie’s ship is still following Claire. They are far behind because the other ship is a fast Man-O-War. Jamie is still locked in the brig and is as sick as a dog. Without Mr. Willoughby giving him acupuncture. Fergus is allowed to bring Jamie food. Jamie is pretty stressed out about Claire. He is worried that they will rape her being a woman on a boat filled with men. Jamie tells Fergus that if he helps break Jamie out of the brig he will give them his blessing to wed. Now if that isn’t motivation to help break him out I don’t know what is. Ok, I seriously do not remember Jamie being locked up at all.

Claire watches as the men that have died that day are getting stitched into their hammocks with a cannonball at their feet for weight. Claire listens as Elias tells her about when you sew a friend in for burial you have to put a stitch through the nose to ensure they are dead. Remember that part it will be important later in the episode. Claire then watches as they commend their souls to the deep. I am rather fond of high seas Claire. She just seems to have a different air about her. The cook is pretty angry at her. He informs her that 11 people died today. That was more than yesterday or the day before that. More people are getting sick each day. He demands to know what Claire is going to do about it. Elias gave her his lucky rabbit foot. He is so sweet. They are suddenly called to the livestock pen. Mistress Johannsen’s husband is sick like the rest of the ship. Claire soon realizes that he is not sick but has been helping himself to the rubbing alcohol and has alcohol poisoning. Claire gets a tip about a Portuguese ship and goes down to the captains quarters to see if she can find out anything. He isn’t there so she looks into his log books. She finds out that he knows who she is and who Jamie is. She also sees the name, Harry Tompkins. She panics. She gets caught trying to leave by the cook. He is a total douche, I cannot stand him. She says she will scream and say he raped her…..her word against his and who would they believe.

Back on the other ship we see Marasli washing Fergus’s stump and replacing his hand. Pretty sure that didn’t happen in the books either. She and Fergus start to get all hot and heavy but Fergus, being the gentleman he is, stops them before they do anything rash. He promised Jamie they wouldn’t and he doesn’t want to ruin that trust. Fergus tries to break Jamie out but he hears the men talking about wanting to take advantage of Marasli. He tells Jamie he can’t do it. He won’t put her in danger like that. With this Marasli takes it upon herself and talks to the captain. She tells him that once Jamie gives his word there is no going back. He keeps his word forever. Once out of the brig, Jamie gives them his blessing to wed.

Back aboard with Claire: She asks Elias who Harry Tompkins was. He is unsure since when the trip began there were over 400 people on board. He will ask around. She tells him she needs to speak to him because he may be the second patient zero. They find Harry Tompkins and drag him into her office. OMG! Its the guy who set the print shop on fire and attacked Ian. Man, his face is messed up. Ian really did a number by throwing that hot lead in his face. Harry tells her he knows all about her and Jamie. He also plans on informing on them when they get to the West Indies. Claire gets him thrown in the brig across from the man that REALLY is patient zero. Once topside she finds Elias. He has come down with the illness. He calls for his mother and Claire tells him that mother is here. With that, he dies. We see her sewing him up in a sail and before she puts the stitch through his nose to ensure that he is dead she returns his lucky rabbit foot back to him. Pass the box of tissues, please. Mistress Johanssen at this point has befriended her. She repeatedly tells Claire her goats need grass. Claire has no idea what this means until she realizes that she has been helping her figure out how to escape. She goes with her new friend to land to feed the goats. She attempts to escape. As she comes over a sand dune she is face to face with the captain. She haltingly lies and tries to say she is looking for herbs to replenish her stock but the captain knows she is trying to run away. He has her escorted back to the ship. As the episode comes to a close we see that it is dark out. Mistress Johanssen takes Claire to the back of the boat and shows her the lights of a town in the distance. She tells Claire to jump. Claire claims she can’t but sees that she has even made her a little raft. She hands Claire some money and Claire takes her skirts off. She takes and deep breath and jumps.

Oh, this episode. It was so sloooow. I was seeing how much time was left by 20 minutes in. It was super slow moving even though a fair amount of stuff left to cover. I am getting a little worried that they won’t be able to cover the rest of this book in the 3 episodes they have left. YES, three episodes! So much left to do! I am really enjoying how they are having Fergus and Marasli interact. In the books, they really don’t do much with them. They are there and are added to adventures but you never see just one on one time. I am really hoping that the next episode has more on land. There is only so much you can do on the water. What do you think, can they cover the rest of the book in the last three episodes? Do you think they will end up cutting something they shouldn’t? Will they end the series on a good jumping off point for next season?

Stay-at-home mom to two children and one toddler. I love to read, travel (haven't done it in a while), and cook. Born and raised in Three Rivers, Michigan and currently, reside in Northern Michigan. Can't wait to start sharing my book thoughts/ reviews with you!!
Previous BOOK REVIEW: How to Speak Chicken by Melissa Caughey
Next BOOK REIVEW: Lies Jane Austen Told Me by Julie Wright