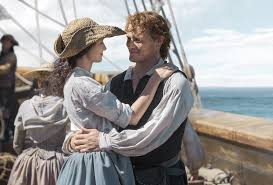 The first thing that jumps out at me is that they have changed the opening music and the photos as well. Remember when they left for Paris, the music changed to a French Court sounding orchestra and more gentle music and the song had been changed to French. They also changed the opening scenes to things that would eventually happen in France. This time, as they are heading to the West Indies, the music has changed to a more ethnic sound with drums and rattles. The scenes are also showing what will happen next.

Jamie and Claire are still awkward around each other. They are in the harbor securing passage to the West Indies and Jamacia. They have received free passage in exchange for Jamie being in charge of the cargo and Claire will be on-board as the physician. Some of the sailors are Jamie’s men from the prison who are still more than happy to serve him. They still call him “Mac Dubh”.

Jamie is watching the last of the Scottish seashore fall away in the distance. Claire asks him if he is being affected by the rise and fall of the water. He tells her no since he wants to watch the last of his homeland disappear in the distance. He has no idea when he will see it again. Jamie tells Claire that redheads and women are are bad luck on boats which is why people are being fairly gruff with them. Jamie tells Claire she has to touch the horseshoe for good luck. Ugh, the rise and fall of the boat are making me seasick. I feel sympathy for poor Jamie. I once got sick in an I-Max whale show. It was not a pretty picture

Fergus shocks and slightly angers Jamie by bringing Marsali, Laoghaire’s eldest daughter, onto the boat with him. They inform Jamie that they have been courting for several months and have “handfasted” (the act of jumping over a broom handle holding hands and announcing they are married) before they came on board. Jamie informs them they will sleep in separate cabins and there will be no sex until they reach land again. Claire is slightly aghast at this since it means them as well. To set a good example she and Jamie will no longer be rooming together. OHHHHHH the way Marsali says “Whooooree” cracks me up every time. I think I will like her character even more than I did in the book.

Jamie tells Claire their belongings have been sent to the boat. Claire opens the trunk and is shocked to see her clothes from Paris. Jamie tells her he just couldn’t part with them and has kept them in a truck hoping against hope that she would return. While looking at the clothes she gets called away to treat a head wound. The men think that the accident was caused by both her being on-board and by someone not touching the horseshoe.

Mr. Willoughby offers to help Jamie with his seasickness. Claire finally settles into a routine. One day she walks in and catches Jamie receiving acupuncture from Mr. Willoughby. He has been receiving treatment from him for 3 weeks and he is feeling loads better. Not wanting to hurt Claire’s feelings he has been allowing her to make him ginger tea twice a day even though it does not help.

The boat suddenly hits the doldrums. Once again the crew members chalk it up to Claire being on-board and someone not touching the horseshoe. We see the crew members throughout the time they have no wind running through the people that have not touched the horseshoe and who has. Claire and Jamie sit on the ship at night and Claire tearfully confesses that she misses Bree horribly. This is the first time since she arrived through the stones that she actually showed emotion and confessed she misses her.

They are still stuck in the doldrums. The drinking water has turned since the bilge water has leaked into it. The water is also tainted by the drowned rats. The must boil before drinking. The other crew members begin to want to throw Jamie’s men overboard as an offering to break the bad luck. One of Jamie’s men really takes it to heart, since he can’t remember if he touched the horseshoe or not. In a drunken moment, he climbs up the rigging and out onto the mast to heave himself off. Jamie climbs up to try and save him. Once Jamie rescues him, a fight breaks out amongst the men wanting blood. Mr. Willoughby takes it upon himself to save the situation. He tells the story of who he was in in the Orient. The sailors are absolutely enthralled by his story. At the end of the story, he tosses his life’s work overboard and the wind comes back instantly. The men are able to refill the fresh water supply.

The men spot a British Man-O-War ship in the distance, They have been clocking it behind them for several hours. They believe that they will want more men, seeing how the sails are raised. Once the adjunct captain arrives on board they find out that they need a surgeon, not the men that they all thought. The way the captain describes the sickness, Claire thinks they are describing Typhoid Fever. Claire and Jamie head into the hallway to “discuss” Claire going over to the British ship. Claire informs him that she will be going. She cannot get sick as she has had the immunizations for the disease.

Once Claire is on-board she sees how bedraggled and sickly crew. She goes below to examine them. I can only imagine the stench below decks: the smell of death, vomit, excrement, etc. After she examines the men she goes and informs the captain about the illness. She tells them how they can try and cull the sickness. The captain gives Claire Mr. Pound as her right-hand man as she sets up the mobile hospital. He is so stinking cute! Suddenly, the ship jolts, Claire realizes that they have “kidnapped” her to get the ship healthy again. As the episode comes to a close she is watching with great concern at the retreating form of Jamie’s ship.

Wow, this episode. There was so much going on. A lot of set up for different things to come. Fergus and Marsali getting married. Claire being kidnapped by the British Army. For being an episode shot basically strictly on the water it didn’t lose any excitement. I am hoping the next few episodes are adventures on the high seas. Did anyone else notice if Duncan Innes was on the boat with Jamie and Claire? I thought Jamie called the one who went up the mast Innes. However, in the books, Innes had a missing arm. That man had both arms which make climbing a mast probably a lot easier. Is there anything you guy hope to see in the next few episodes? Things that you hope they leave out? I am actually rather pleased with how they have been portraying Mr. Willoughby. They are making him not as much of a pervert as they do in the book. They are also have fewer racists remarks muttered towards him.

Stay-at-home mom to two children and one toddler. I love to read, travel (haven't done it in a while), and cook. Born and raised in Three Rivers, Michigan and currently, reside in Northern Michigan. Can't wait to start sharing my book thoughts/ reviews with you!!
Previous BOOK REVIEW: Poison by Galt Niederhoffer
Next BOOK REVIEW: How to Speak Chicken by Melissa Caughey