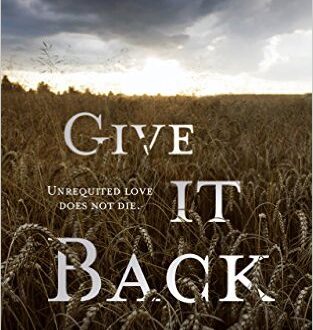 BOOK REVIEW: “Give It Back” by Danielle Esplin 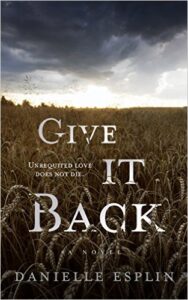 Not long ago, Lorraine lost her husband to another woman. She thought that was the worst thing that could happen to her, but soon she realizes it’s just the beginning of an everlasting nightmare.

Lexy, an au pair from London, moves to Seattle to help Lorraine with her infant son. But she didn’t come for the child…she came for something else.

When Ella receives a call from her sister, Lorraine, who begs her to leave San Diego to spend time with her, she decides to take a few days off from work to visit her. Frightened to see how much Lorraine has weakened since her diagnosis eight months ago, she packs a bag and heads to Seattle with a foreboding feeling that this might be the last time she sees Lorraine.

But on her way to the airport, she learns that something shocking has happened since she last spoke with Lorraine and now. To make matters worse, once Ella arrives in Seattle, Lorraine’s story keeps changing, making Ella question how reliable her sister really is.

Soon Ella is entangled in a mysterious investigation, and more so, in the lives of everyone involved. She realizes not only that she won’t go home anytime soon but also that she’ll never look at others the same way she did before.

** A copy of this book was provided by the author in exchange for an honest review.**

I’m not going to beat around the bush. I did not like most of this book. The language was one thing that really bothered me, and I lost respect for the book the more I kept reading. I would have appreciated a heads up that the F word is used easily 100+ times and in completely unnecessary ways. When the majority of characters use the F word to express displeasure, distaste, anger, etc, I feel like it’s the way the author operates, not something that could uniquely highlight a character. Language can sometimes be used to have a certain effect in a story, but this story is not one of those examples. It was just overused and annoying.

Another thing that really bothered me about this book was the sexual situations. And I get it, I’m an adult, but I don’t find it entertaining to read about the sexual exploits of anyone, even fictional characters in books. The character of Lexy was probably one of the most disturbed and disgusting characters I have ever read about. And I’ve read a lot of books. The graphic ways in which she sleeps with her numerous partners was completely unnecessary. Again, another way I lost respect for this book.

The only redeeming quality about this book, and the only reason I didn’t give it 1 out of 5 stars, was I wanted to solve the murder that happens. There were many intertwining story lines, and I went back and forth often, trying to figure out who was responsible. Like a good mystery, I was really surprised who did it in the end. This was the only reason I kept reading the book though because even the ways the violence was detailed was pretty gruesome at times.

Finally, the worst thing of all, in my opinion, is that the book is left open ended so that the author could easily write a sequel. I have one word for that – NO! I would not recommend reading this book or a sequel (if one ever comes out). There are much more satisfying endeavors out there. If Esplin writes another novel, I hope I would give her another chance. But I also hope she would write with a bit more sophistication and tastefulness.

If you’d like to try the book out for yourself, we always encourage you to pick up a copy at Amazon or Barnes and Noble. You can also add it to your To Reads list on Goodreads and leave your feedback, once you are done reading, for the author.

BIO: Born and raised in Michigan, Amy is a proud wife, mother, and Christian. She currently teaches 8th grade Language Arts, where she can show her nerdy tendencies in her love for punctuation, book discussions, descriptive words, and parallel structure. She also enjoys reading, shopping, spending time with her family, and eating really delicious food.
Previous BOOK REVIEW: “The Beauty Queen of Jerusalem” by Sarit Yishai-Levi
Next BOOK REVIEW: “Railhead” by Philip Reeve