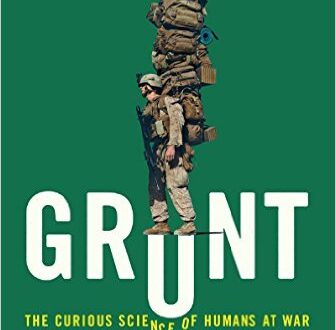 BOOK REVIEW: “Grunt: The Curious Science of Humans at War” by Mary Roach 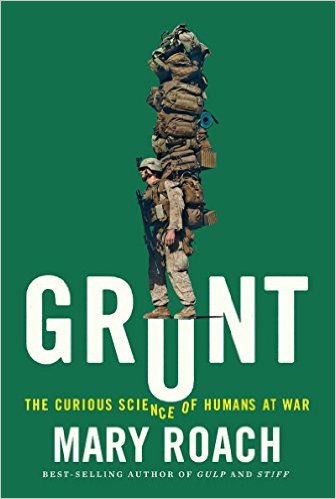 Grunt tackles the science behind some of a soldier’s most challenging adversaries—panic, exhaustion, heat, noise—and introduces us to the scientists who seek to conquer them. Mary Roach dodges hostile fire with the U.S. Marine Corps Paintball Team as part of a study on hearing loss and survivability in combat. She visits the fashion design studio of U.S. Army Natick Labs and learns why a zipper is a problem for a sniper. She visits a repurposed movie studio where amputee actors help prepare Marine Corps medics for the shock and gore of combat wounds. At Camp Lemmonier, Djibouti, in east Africa, we learn how diarrhea can be a threat to national security. Roach samples caffeinated meat, sniffs an archival sample of a World War II stink bomb, and stays up all night with the crew tending the missiles on the nuclear submarine USS Tennessee. She answers questions not found in any other book on the military: Why is DARPA interested in ducks? How is a wedding gown like a bomb suit? Why are shrimp more dangerous to sailors than sharks? Take a tour of duty with Roach, and you’ll never see our nation’s defenders in the same way again.

OK, to start with, who the heck thinks “Let’s shoot chicken carcasses out of a specialized gun to see what happens when birds run into planes?” Turns out the military does. I guess it works since they do it with turkey vultures as well. It is projected that it will save the Air Force about $5 million per year as well as lives of unknown numbers of pilots and turkey vultures. I was ecstatic to have my wish granted by the publisher and be allowed to review this book. This isn’t the first book that I have read by Mary Roach. I have read her book Stiff and the book Bonk! by her as well. After reading this one, I am certainly adding her other ones to the top of my “TO READ” list.

When I think of the U.S Armed Forces, I think of big burly men, guys on subs and amazing pilots landing on a massive floating airstrip. I know there are five branches of the service. In reality, it is much more than that, as Mary Roach so marvelously shows us. It is the people that meticulously test fabric for water and stain resistance while also making sure that it is flame retardant. It is the people that do diarrhea studies in the field leading to some servicemen taking Imodium prophylactically so that while on missions they don’t have to go. During this chapter, I learned way, way, way too much about flies and I am totally grossed out even more by them. There are medical doctors doing research about maggots still. They use them to help debride IED wounds. Of course, they ask permission before dumping maggots on people! What people don’t realize is that maggots only eat dead and decaying flesh. Once they eat the dead flesh, they go look for more. Another random fact that I learned, and I learned a lot of random facts from this book, is that subs are so advanced that they can travel silently while detecting other vessels until the galley crew empties the grind buckets. Then vast schools of snapping shrimp rush the hull of the sub to feed. Their collective tumult can mask engine noise of other vessels! Who knew shrimp were so dangerous!

This book really opened my eyes to what actually goes into running the military. Yes, it is the Generals, the President of the United States, and the enlisted men. It is also the people that test and make the uniforms. The people that tested and made the shark repellant that they used while battling in the Pacific for WW2. It is the man that lived for a month in Mammoth Caves to figure out circadian rhythms for men that served in subs. It is the people that are so passionate about maggots and flies that they dedicate their life to raising and researching them. Mary Roach shows us all of these people. Up close and personal. She asks the embarrassing questions and gets honest answers back. While the book does have a science side to it I also laughed my head. Her writing style is easy to understand so that a layperson can follow. She isn’t afraid to jump feet first into a subject and write something incredibly thought provoking.

Pick up a copy of the book and check it out for yourself from Amazon or Barnes and Noble. You can also check out more books from author Mary Roach on Amazon HERE. Also add this book to your To Reads list on Goodreads and share your feedback with the author when you are done.

Stay-at-home mom to two children and one toddler. I love to read, travel (haven't done it in a while), and cook. Born and raised in Three Rivers, Michigan and currently, reside in Northern Michigan. Can't wait to start sharing my book thoughts/ reviews with you!!
Previous BOOK REVIEW: “Every Heart a Doorway” by Seanan McGuire
Next BOOK REVIEW: “In the Hope of Memories” by Olivia Rivers