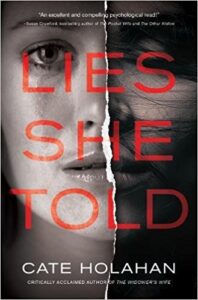 Sometimes the truth is darker than fiction.

Liza Jones has thirty days to write the thriller that could put her back on the bestseller list. In the meantime, she’s struggling to start a family with her husband, who is distracted by the disappearance of his best friend, Nick. With stresses weighing down in both her professional and her personal life, Liza escapes into writing her latest heroine.

Beth is a new mother who suspects her husband is cheating on her while she’s home alone providing for their newborn. Angry and betrayed, Beth sets out to catch him in the act and make him pay for shattering the illusion of their perfect life. But before she realizes it, she’s tossing the body of her husband’s mistress into the river.

Then the lines between fiction and reality begin to blur. Nick’s body is dragged from the Hudson and Liza’s husband is arrested for his murder. Before her deadline is up, Liza will have to face up to the truths about the people around her, including herself. If she doesn’t, the end of her heroine’s story could be the end of her own.

Imagine reading two books inside one. Sound interesting? That is what Lies She Told was. Author Cat Holahan found an interesting way to weave two novels into one novel! What do I mean? Every other chapter is from the perspective of the main character, Liza. She is married to a lawyer who has a best friend and law partner, Nick, who has been missing for some time. Liza is also an author. So the chapters that are not her are her chapters she is writing for her new novel.

I will start by saying this confused me in the beginning. It’s not really explained right away. I thought there was two story lines intertwining, but turned out I was reading the novel as she was writing it. As confusing as this was, it was also quite interesting because I felt it gave us a glimpse into her mind and what she was actually feeling at times. I had an inkling these two stories, real life and her writing, were tied together some how, but boy was I surprised in the end. Holahan wrote a good story about the mental struggles of someone going through something serious, such as the inability to get pregnant and getting hormonal injections. As a female, our hormones are everywhere, but this lady was crazy. Down and simple. And Holahan wrote crazy really well.

While the book intrigued me and made me curious as to what was going to happen, keeping me flipping pages, I felt it was a bit disjointed. The lack of explanation on the exchanging chapters between story lines ruined the beginning of the book because I spent a little time trying to figure out what was happening. The behavior and decision making of Liza was a little all over the place, but that could be written off to how the story played out. I still feel it made it a bit hard to follow or stay on track with. Many times I confused the two stories in my head thinking Liza had done something, yet it was her character in an off chapter. None of these small irks of mine ruined the book, but I felt it made it harder for me to enjoy.

I would still recommend Lies She Told to everyone, especially if you are a murder, mystery lover such as myself. It does have a lot of suspense and a lot of guessing!

You can get your copy of Lies She Told on Amazon or Barnes and Noble on September 12th or pre-order now. Also check your local bookstores. Make sure to add the book to your To Read list on Goodreads and leave feedback for the author when you are finished. Check out more novels from Cat Holahan on Amazon here.

Super Mom and Awesomely Nerdy Lady who can’t stand to sit still. I ran a successful online radio show that brought fans up close and personal with their favorite music, television and movie stars. Now, with my hilariously nerdy partners in crime, I have turned to my first love, BOOKS! A lover of books from a young age, I now always have a book on me no matter where I go. Books are my therapy. Twitter: @Kristin_Downer
Previous BOOK REVIEW: Two By Two by Nicholas Sparks
Next BOOK REVIEW: Glow by Megan E. Bryant