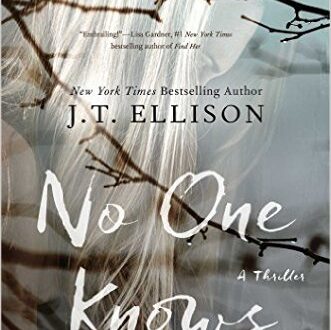 BOOK REVIEW: “No One Knows” by J.T. Ellison 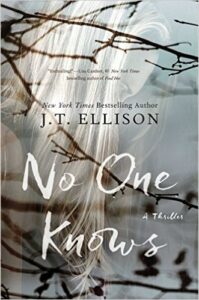 In an obsessive mystery as thrilling as The Girl on the Train and The Husband’s Secret, New York Times bestselling author J.T. Ellison will make you question every twist in her page-turning novel—and wonder which of her vividly drawn characters you should trust.

The day Aubrey Hamilton’s husband is declared dead by the state of Tennessee should bring closure so she can move on with her life. But Aubrey doesn’t want to move on; she wants Josh back. It’s been five years since he disappeared, since their blissfully happy marriage—they were happy, weren’t they?—screeched to a halt and Aubrey became the prime suspect in his disappearance. Five years of emptiness, solitude, loneliness, questions. Why didn’t Josh show up at his friend’s bachelor party? Was he murdered? Did he run away? And now, all this time later, who is the mysterious yet strangely familiar figure suddenly haunting her new life?

In No One Knows, the New York Times bestselling coauthor of the Nicholas Drummond series expertly peels back the layers of a complex woman who is hiding dark secrets beneath her unassuming exterior. This masterful thriller for fans of Gillian Flynn, Liane Moriarty, and Paula Hawkins will pull readers into a you’ll-never-guess merry-go-round of danger and deception. Round and round and round it goes, where it stops…no one knows.

I try and pride myself on knowing the best of the best in Mystery and Thriller writers and that includes those on the New York Times Bestseller list. However, I was not familiar with J.T. Ellison when I opened “No One Knows” for the first time. Knowing nothing about her writing style or much about her at all, I was very excited to see what was in store for me.

“No One Knows” follows Aubrey Hamilton as she fights along the tough road of widow life. Her husband Josh having gone missing five years ago has now been declared dead and suddenly some weird stuff starts happening. She starts to think that maybe what she thought she knew is not the truth. The story take you through many turns as you flip between Aubrey, Josh (five years ago), Josh and Aubrey as teenagers, Daisy (Josh’s mom) when Josh and Aubrey were kids and teens, and so forth. There are a lot of intersecting time lines. While I feel some may be unnecessary, they do end up tying up some of the loose, confusing ends in the story. We also get to know a few extra characters, including Chase. Chase ends up being a great character in the story and I loved learning about him.

I will say this without giving away anything… everyone in this story is hiding something. Nobody is completely innocent of lies or deception at some point and it all ends up coming to light at some point. Ellison definitely keeps you guessing. Each time I thought I may have a grasp on what was happening there was a new piece of evidence or clue that sent me in a different direction. Sometimes I found this frustrating, but mostly it kept me on my toes and wanting to read more. I found myself picking up this book at odd times just to squeeze in a minute or two of reading between chores.

The one major flaw I found in this book was the ending. It should have ended about two chapters before it did. The ending would have been perfect. Just enough twists and turns to keep me guessing until the end and a shocking ending with an explosive conclusion. Unfortunately Ellison added a bit more to it and threw in a few more unnecessary twists that I felt made the story go from just crazy enough to be real life to completely unbelievable and a bit of a let down. For something I loved so much to end in such a way was disappointing. The final chapter and a half had so many things thrown in it could have been it’s own story. Maybe a sequel? But it didn’t need to be jammed into that small space and ruin the perfectly timed peak that already happened before. It was almost as if Ellison really wanted a happily ever after even though it didn’t fit with the thriller that was already attached.

Although the ending let me down a bit, I still loved the story. Ellison has a great writing style and I am itching to go pick up her other work to see what else she can surprise me with. I don’t want to discourage anyone from reading this story because it is really good and the characters are written with so much detail to their personality, but not as much their looks. They talk about looks but it’s not everything. Which… I like because you can put anyone you want in their shoes. I guarantee Aubrey looks different to everyone that reads this story. So while I cannot offer a higher star rating because of the let down with the ending, I would be tempted to give it five stars had it ended two chapters before it did. But a solid three stars for a great story otherwise. Definitely an author I’ll keep reading for sure.

Pick up J.T. Ellison on Amazon or Barnes and Noble now or in a bookstore nearest you! We always encourage you to add the book to your To Reads list on Goodreads so as not to forget to pick it up and also leave feedback for the author when you are done. You can also see J.T. Ellison and all her work online on her website HERE and follow her on twitter @ThrillerChick. She has many more books you can check out.

Super Mom and Awesomely Nerdy Lady who can’t stand to sit still. I ran a successful online radio show that brought fans up close and personal with their favorite music, television and movie stars. Now, with my hilariously nerdy partners in crime, I have turned to my first love, BOOKS! A lover of books from a young age, I now always have a book on me no matter where I go. Books are my therapy. Twitter: @Kristin_Downer
Previous BOOK REVIEW: “Wild Swans” by Jessica Spotswood
Next BOOK REVIEW: “Feather Brained” by Bob Tarte