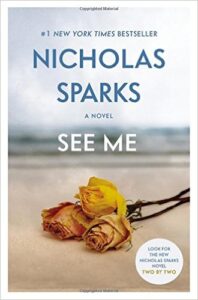 Maria Sanchez, the hardworking daughter of Mexican immigrants, is the picture of conventional success. With a degree from Duke Law School and a job at a prestigious firm in Wilmington, she is a dark-haired beauty with a seemingly flawless professional track record. And yet Maria has a traumatic history of her own, one that compelled her to return to her hometown and left her questioning so much of what she once believed.

A chance encounter on a rain-swept road will alter the course of both Colin and Maria’s lives, challenging deeply held assumptions about each other and ultimately, themselves. As love unexpectedly takes hold between them, they dare to envision what a future together could possibly look like . . . until menacing reminders of events in Maria’s past begin to surface.

As a series of threatening incidents wreaks chaos in Maria’s life, Maria and Colin will be tested in increasingly terrifying ways. Will demons from their past destroy the tenuous relationship they’ve begun to build, or will their love protect them, even in the darkest hour?

Rich in emotion and fueled with suspense, SEE ME reminds us that love is sometimes forged in the crises that threaten to shatter us . . . and that those who see us for who we truly are may not always be the ones easiest to recognize.

I’m not a regular reader of Nicholas Sparks, but this book was recommended to me by a friend, so I thought I would give it a shot. Initially, when I saw that it was close to 500 pages, I was pretty hesitant. I have a three year old daughter, so the odds of me being able to finish it in a timely manner seemed pretty slim. However, due to the wonderful writing style of Sparks and the enticing story line, I finished this book in less than three weeks! If you decide to pick up a copy, I’m sure you won’t be disappointed.

See Me follows the lives of Colin and Maria, two young people with extremely different backgrounds. Colin has had several run-ins with the law, and throughout the entire story, he is trying to stay on the straight and narrow path and do good for himself. He has several “last chance encounters” that almost send him to prison for life. As for Maria, she is a good girl. She is educated, regularly spends time with her parents, has a typical sisterly relationship with her only sibling Serena, and has a steady job. Not that her job, or her life for that matter, isn’t without its setbacks, but Maria is a fairly strong character.

As Colin and Maria’s lives start to weave together, it is a sweet story. Their relationship also seems oddly natural since they are vastly different people. They stay uniquely bonded throughout the story, and their relationship is believable and lovable. I enjoyed both of their characters a lot. I found myself picturing who would play them in the movie version (if it were to ever be made). Hope I’m not the only one who does this!

There is also a certain element of suspense about halfway through the novel that remains until the very end. As I’m sure is fairly typical of Sparks writing style, the ending (epilogue) is satisfying with a happily ever after feel. The only thing I wasn’t crazy about with this book is that there were some parts in the middle where I felt the story started to lull a bit. I can’t really pinpoint anything specific, but it just felt lengthy at times. Overall though, this was a very satisfying read, and you will likely be happy you decided to pick up this book!

BIO: Born and raised in Michigan, Amy is a proud wife, mother, and Christian. She currently teaches 8th grade Language Arts, where she can show her nerdy tendencies in her love for punctuation, book discussions, descriptive words, and parallel structure. She also enjoys reading, shopping, spending time with her family, and eating really delicious food.
Previous BOOK REVIEW: After the Fall by Kate Hart
Next BOOK REVIEW: Daniel by Tammy Chupp