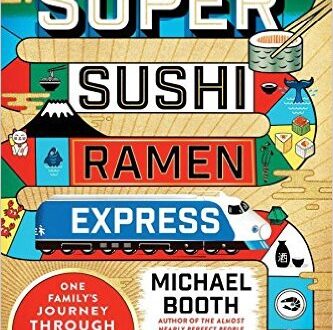 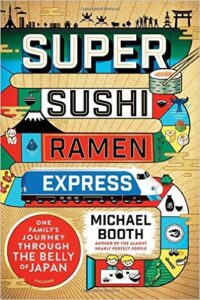 From the author of The Almost Nearly Perfect People comes Super Sushi Ramen Express, a fascinating and funny culinary journey through Japan

Japan is arguably the preeminent food nation on earth; it’s a mecca for the world’s greatest chefs and has more Michelin stars than any other country. The Japanese go to extraordinary lengths and expense to eat food that is marked both by its exquisite preparation and exotic content. Their creativity, dedication, and courage in the face of dishes such as cod sperm and octopus ice cream are only now beginning to be fully appreciated in the sushi and ramen-saturated West, as are the remarkable health benefits of the traditional Japanese diet.

Food and travel writer Michael Booth takes the culinary pulse of contemporary Japan, learning fascinating tips and recipes that few westerners have been privy to before. Accompanied by two fussy eaters under the age of six, he and his wife travel the length of the country, from bear-infested, beer-loving Hokkaido to snake-infested, seaweed-loving Okinawa. Along the way, they dine with—and score a surprising victory over—sumo wrestlers, pamper the world’s most expensive cows with massage and beer, share a seaside lunch with free-diving female abalone hunters, and meet the greatest chefs working in Japan today. Less happily, they witness a mass fugu slaughter, are traumatized by an encounter with giant crabs, and attempt a calamitous cooking demonstration for the lunching ladies of Kyoto.

This book made me hungry with every turn of the page. I could see every steaming bowl of ramen. I could taste the sake and smell the fermenting soy sauce. I have read a fair share of travelogues and food books. This one ranks right up there in the top 5. What makes it more relatable to a large percent of the population is that he takes his wife and two kids with him on the adventure. While some people would jet off to write a book and travel, he takes his family with him.

The story begins as he is at school at Le Cordon Bleu in Paris, France. While there, he befriends a man, Toshi, from Japan. Toshi is appalled by the way the French teach people to cook fish. Michael is unsure until Toshi gives him a book about Japanese cooking. Just reading that book plants the seeds of interest in his mind. With that, he begins to plan a trip to Japan to find out for himself everything he read in the book. What he originally planned as a trip with just him turned into a family trip that he wouldn’t change for the world. They packed the family up for a several month long trek through Japan to discover its culinary secrets. Spending several weeks in Toyko, Kyoto, and Okinawa just to name a few. While in Japan he went to a sake tasting event where he got slightly tipsy. He took his family to a Sumo Wrestler meal. They managed to get a meeting with the people that actually makes MSG. They went to a place where they were eating fugu during what he was excited to find was the annual Fugu Festival. While there he learned they are starting to breed non-poisonous fugu. However, most are still toxic and I have read that around six or seven people die from eating wrongly prepared fugu in Japan each year. Did you know that the average Japanese consumes 2 gallons of soy sauce a year?!? No neither did I.

This book is fantastic. The food sounds amazing. What I like about this book the most is that almost all of it is affordable to the everyday person. The only super expensive meal he ate, was a “by invite only” meal. He only happened to get it by doing an interview at the Chef School in Toyko. The man who ran the school invited him to dine with him. The stories are entertaining and engaging. He keeps the pages turning with his stories. He goes in depth with things without being too dry and boring. I will be reading more books by this author. I have already added his books to my “to read” list.

Stay-at-home mom to two children and one toddler. I love to read, travel (haven't done it in a while), and cook. Born and raised in Three Rivers, Michigan and currently, reside in Northern Michigan. Can't wait to start sharing my book thoughts/ reviews with you!!
Previous BOOK REVIEW: Hate List by Jennifer Brown
Next BOOK REVIEW: Afterparty by Ann Redisch Stampler