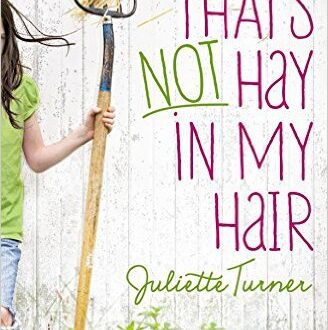 BOOK REVIEW: “That’s Not Hay in My Hair” By Juliette Turner 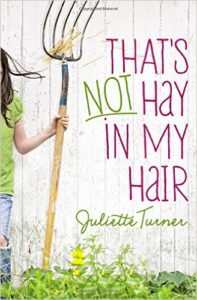 New York City life had crammed sidewalks, gasoline-filled puddles, and angry taxi drivers, but Juliette enjoyed the towering sky-scrapers, the half-block walk to school, and the restaurant smells wafting into her bedroom. She had never cared for a horse, let alone a long-horn, when her mother announced their imminent move to a 300 acre ranch in Texas, where they would be caring for three horses, five dogs, twenty-five longhorns, and a cat … all by themselves.

Juliette couldn’t help feeling excited, even though she’d have to climb a hill to get a bar of cell-phone service. Soon she was running from bats and snakes, rescuing a calf from a twenty-foot ditch, medicating ponies, and having adventures so crazy it’s hard to believe they’re for real—but it all happened exactly how it’s written.

Get ready for side-splitting laughs, heart-wrenching tears, and surprising life lessons learned down on the farm and shared by fourteen-year-old Juliette Turner.

My love for books extends far and wide. When I get the opportunity to read a book by a young author who is still growing and learning their craft… I jump on it. Juliette Turner is a young, beautiful, and insanely talented 18-year-old girl who has now released her debut fiction novel “That’s Not Hay in My Hair”. Having written a few non-fiction books before this (she started at an incredibly young age) she was no stranger to writing, but fiction is a bit different.

“That’s Not Hay in My Hair” follows the story of Juliette (yes… it’s based on herself) as she moves from the hustle and bustle of New York City to a Longhorn ranch in Texas! Turner intertwines the struggles of a single mom raising a daughter on her own, with the struggles of running a ranch with only the help of friendly neighbors, and the hilarity of everything else that could potentially go wrong in the life of a middle school aged girl. Turner writes in a way I find mature and well read for even a seasoned author. Juliette’s experiences are fun to read about, great to picture as you read, and children in middle school and surrounding ages could relate to the characters feelings and experiences. This allowed the reader, even myself, to relate more to the story.

With all the great stories intertwined in the book, my only issue was I felt the story was not as cohesive as it could have been. At times it jumped from one moment to farther in the future without warning. Some of the transitions from chapter to chapter could have been smoother. Made it feel very broken up. The individual parts were all great, but it would have flowed better had the transitions been smoother. .

Other than that, the story was good and characters were lovable. Especially those precious animals! I can already tell Juliette Turner is going to be on to huge things in her future. This is only her first fiction novel and already entertaining. I cannot wait to see where she goes as she gets older and continues to improve her craft. A solid 3 stars for a good book. Almost to 4 had the transitions been a bit smoother. But still a great read for anyone.

Pick up your copy of “That’s Not Hay In My Hair” on Amazon, Barnes and Noble, or your local bookstore. Add it to your To Reads list on Goodreads and leave feedback for Juliette on there after you finish reading! Also follow Juliette on twitter @JulietteTurner to find out more about what she is doing!

Super Mom and Awesomely Nerdy Lady who can’t stand to sit still. I ran a successful online radio show that brought fans up close and personal with their favorite music, television and movie stars. Now, with my hilariously nerdy partners in crime, I have turned to my first love, BOOKS! A lover of books from a young age, I now always have a book on me no matter where I go. Books are my therapy. Twitter: @Kristin_Downer
Previous BOOK REVIEW: “You Were Here” by Cori McCarthy
Next BOOK REVIEW: “Then Comes Love” by Lindsay Detwiler