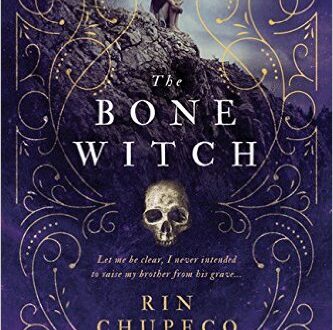 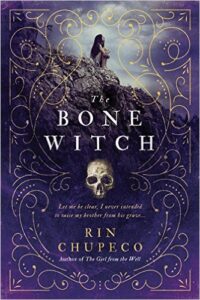 When Tea accidentally resurrects her brother from the dead, she learns she is different from the other witches in her family. Her gift for necromancy means that she’s a bone witch, a title that makes her feared and ostracized by her community. But Tea finds solace and guidance with an older, wiser bone witch, who takes Tea and her brother to another land for training.

In her new home, Tea puts all her energy into becoming an asha — one who can wield elemental magic. But dark forces are approaching quickly, and in the face of danger, Tea will have to overcome her obstacles…and make a powerful choice.

Memoirs of a Geisha meets The Name of the Wind in this brilliant new fantasy series by Rin Chupeco!

When I saw the title, cover, and description of this book I knew I had to read it. It was a young adult, fantasy, supernatural kind of book all rolled into one without appearing to be filled with the normal drivel that I try not to read. I wasn’t let down.

The book follows the main character, Tea. She lives with her family. She has yet to find out what kind of “witch” she is. That is until her brother Fox dies in the war and Tea resurrects him from the dead at his funeral in front of their appalled parents and family. He becomes her “familiar” and he follows her throughout the book. Usually always one step behind her but he does have his own storyline that doesn’t produce his own chapters but instead is weaved through Tea’s story. Her family is heartbroken that she is a “bone witch” They agree to send her away with another Dark asha that shows up to help care for Tea after she becomes ill after raising her brother. Now that Fox is bound to her, it’s a if she dies he dies type deal, he goes with her as she begins her training to be a Dark asha. Her “sisters” soon learn that she is an extremely powerful Dark asha and that she needs to learn how to control her powers. The short story: she learns to wield her power successfully and it is quite an adventure. The long story: well I will let you discover that one on your own.

This story was jammed packed with exciting things. Gasps as she learns to wield her powers, tears as her brother dies and she raises him from the dead (oddly at his request) cheers as she graduates, and humiliation as she is forced to be a house servant and do more work than one person ever should. The only reason I am giving it 4 stars, and it really is ticky tack, but I was so confused by the Point of View. It bounced between past and present. How far in the present it was I wasn’t sure and how she ended up where she was at different times left me totally lost. I hope that in the next book she will clear up that whole thing. I would just be reading along and a new chapter start and it was in italics and slightly smaller print and that was the only way I knew that it was in the present and not the past. I can only assume that past portion of the story, which is about 80% of the book, is being told by Tea to someone else. Other than that small gripe I really enjoyed the book and cannot wait until the next one comes out.

You can pick up your copy of “The Bone Witch” by Rin Chupeco on March 7th. It is available for pre-order Amazon and Barnes and Noble as well as your local bookstore. Also add it to your To Reads shelf on Goodreads and leave feedback for the author when you are done. You can also check out more from author Rin Chupeco by checking out her website HERE.

Stay-at-home mom to two children and one toddler. I love to read, travel (haven't done it in a while), and cook. Born and raised in Three Rivers, Michigan and currently, reside in Northern Michigan. Can't wait to start sharing my book thoughts/ reviews with you!!
Previous BOOK REVIEW: Toru: Wayfarer Returns (Sakura Steam #1) by Stephanie R. Sorensen
Next BOOK REVIEW: The Last Thing You Said by Sara Biren