BOOK REVIEW: The Breakdown by B. A. Paris 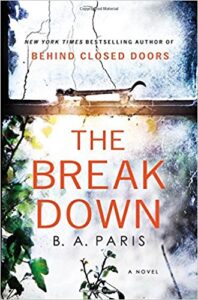 If you can’t trust yourself, who can you trust?

Cass is having a hard time since the night she saw the car in the woods, on the winding rural road, in the middle of a downpour, with the woman sitting inside―the woman who was killed. She’s been trying to put the crime out of her mind; what could she have done, really? It’s a dangerous road to be on in the middle of a storm. Her husband would be furious if he knew she’d broken her promise not to take that shortcut home. And she probably would only have been hurt herself if she’d stopped.

But since then, she’s been forgetting every little thing: where she left the car, if she took her pills, the alarm code, why she ordered a pram when she doesn’t have a baby.

The only thing she can’t forget is that woman, the woman she might have saved, and the terrible nagging guilt.

Or the silent calls she’s receiving, or the feeling that someone’s watching her…

I could not put this book down. I started The Breakdown by B.A. Paris one evening and finished it the next. Stayed up way too late, but it was well worth it. This novel is so intriguing and draws you in to the point where the world falls away around you and you feel everything the characters are feeling.

The Breakdown follows Cass, a young woman who is happily married with a great job, but goes through a traumatic time after witnessing the beginning of a horrific murder. Following that she feels like she is slowly losing her mind. And she has every right to feel like that.

This entire novel makes you feel for Cass. You want to help her. You want her to feel better. You want to believe that she is not going crazy. The fact that author B.A. Paris can make you feel such strong connection and emotions for a character is one of the best things an author can do. This makes me want to read everything from B.A. Paris from this point going forward. On top of that, the ending when all is revealed on who is guilty, who is innocent, and who is crazy took me by surprise. While I had a few guesses that ended up being correct, the ending of how it all came to be and how everything went down was mind blowing. And even So cunning. So intriguing. This novel was packed with mystery and suspense from page one. I am an absolute fan.

I highly recommend this novel to anyone, whether you are looking to kill your boredom on a rainy day or just looking for the next page turner to read, The Breakdown is it.

The Breakdown by B.A. Paris will be available on July 18th from Amazon, Barnes and Noble, and a bookstore near you. It is available for pre-order on Amazon and Barnes and Noble now, so get your copy ordered up! Also add it to your To Reads list on Goodreads and leave feedback for author B.A. Paris when you are finished.

Super Mom and Awesomely Nerdy Lady who can’t stand to sit still. I ran a successful online radio show that brought fans up close and personal with their favorite music, television and movie stars. Now, with my hilariously nerdy partners in crime, I have turned to my first love, BOOKS! A lover of books from a young age, I now always have a book on me no matter where I go. Books are my therapy. Twitter: @Kristin_Downer
Previous BOOK REVIEW: The Little French Bistro by Nina George
Next BOOK REVIEW: 100% Real: 100 Insanely Good Recipes for Clean Food Made Fresh by Sam Talbot