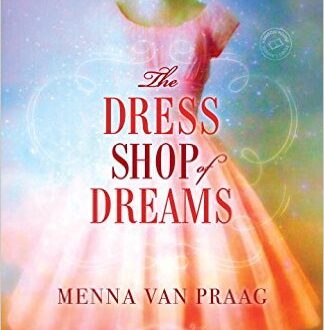 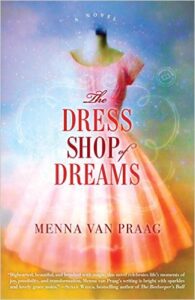 Since her parents’ mysterious deaths many years ago, scientist Cora Sparks has spent her days in the safety of her university lab or at her grandmother Etta’s dress shop. Tucked away on a winding Cambridge street, Etta’s charming tiny store appears quite ordinary to passersby, but the colorfully vibrant racks of beaded silks, delicate laces, and jewel-toned velvets hold bewitching secrets: With just a few stitches from Etta’s needle, these gorgeous gowns have the power to free a woman’s deepest desires.

Etta’s dearest wish is to work her magic on her granddaughter. Cora’s studious, unromantic eye has overlooked Walt, the shy bookseller who has been in love with her forever. Determined not to allow Cora to miss her chance at happiness, Etta sews a tiny stitch into Walt’s collar, hoping to give him the courage to confess his feelings to Cora. But magic spells—like true love—can go awry. After Walt is spurred into action, Etta realizes she’s set in motion a series of astonishing events that will transform Cora’s life in extraordinary and unexpected ways.

I know, I’m making this book sound super appealing, right? Well, let me break it down for you. I felt like this book had an identity crisis. It tried to be a clever, mysterious, magical love story. I would have preferred that the author picked one, or maybe two, of those things and done them well, instead of doing all three just so-so. It’s like a restaurant that offers too many things on the menu. Everything tastes mediocre, not fabulous as it potentially could if they chose to master a few select dishes.

Additionally, there were also way too many story lines to follow, that even though they all made sense with one another in the end, almost made it feel like the book was trying too hard. First, Cora, the orphan, scientist, and granddaughter. Second, Etta, the grandmother and dress shop owner. Next, Walt, the bookshop owner and longtime best friend to Cora. Then, weave in Dylan (Walt’s boss who is falsely corresponding with several women under Walt’s name), Milly (Walt’s girlfriend who is struggling to find herself after her husband’s death), Henry (the detective helping Cora solve the mystery of her parent’s death), Francesca (Henry’s alcoholic ex-wife), Dr. Baxter (Cora’s boss and, as we eventually discover, a murderer), and Sebastian (the priest who intersects multiple character’s lives). Whew! And even still, I feel like I’m probably forgetting a few characters. Again, if the author would have picked a few less storylines and given more attention to details and really solid character development, I would have liked this book a lot more. I felt like I got a sampling of a lot of characters, when really, I’d prefer to go more in depth with just a few characters.

Just so I don’t sound super negative and hateful of this book, I do need to mention that I did find pleasure in certain parts, or truly, I would not have kept reading. For one, it was very easy to read. It was also very easy to want to keep going to the next chapter because you didn’t often learn a lot about one character before the author shifted to another one. I also liked the concept of the dress shop and how the dresses picked the women; it was not the women who picked the dresses. Kind of a cute concept. All in all, this book had elements to enjoy, but on the whole, I think it left something to be desired.

You can get your own copy of “The Dress Shop of Dreams” by Menna van Praag on Amazon or Barnes and Noble now and start reading. Also make sure to add it to your Goodreads To Read list and leave feedback of your own for the author when you are finished.

BIO: Born and raised in Michigan, Amy is a proud wife, mother, and Christian. She currently teaches 8th grade Language Arts, where she can show her nerdy tendencies in her love for punctuation, book discussions, descriptive words, and parallel structure. She also enjoys reading, shopping, spending time with her family, and eating really delicious food.
Previous BOOK REVIEW: “The Given Day” by Dennis LeHan
Next BOOK REVIEW: Sous Vide at Home: The Modern Technique for Perfectly Cooked Meals by Lisa Q. Fetterman