BOOK REVIEW: The Education of a Coroner: Lessons in Investigating Death by John Bateson 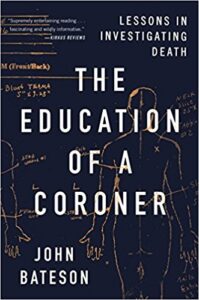 In the vein of Dr. Judy Melinek’s Working Stiff, an account of the hair-raising and heartbreaking cases handled by the coroner of Marin County, California throughout his four decades on the job—from high-profile deaths to serial killers, to Golden Gate Bridge suicides.

Marin County, California is a study in contradictions. Its natural beauty attracts thousands of visitors every year, yet the county also is home to San Quentin Prison, one of the oldest and largest penitentiaries in the country. Marin ranks in the top one percent of counties nationwide in terms of affluence and overall health, yet it is far above the norm in drug overdoses and alcoholism, and comprises a large percentage of suicides from the Golden Gate Bridge.

Ken Holmes worked in the Marin County Coroner’s Office for thirty-six years, starting as a death investigator and ending as the three-term, elected coroner. As he grew into the job—which is different from what is depicted on television—Holmes learned a variety of skills, from finding hidden clues at death scenes, interviewing witnesses effectively, managing bystanders and reporters, preparing testimony for court to notifying families of a death with sensitivity and compassion. He also learned about different kinds of firearms, all types of drugs—prescription and illegal—and about certain unexpected and potentially fatal phenomena such as autoeroticism.

Complete with poignant anecdotes, The Education of a Coroner provides a firsthand and fascinating glimpse into the daily life of a public servant whose work is dark and mysterious yet necessary for society to function.

The title of the book really drew me in. I find Forensic Science fascinating. The detective work that goes into it to find out how the person died. The people who work with the dead need to have a special personality. It’s a tough thing to deal with. Having worked in a Level 1 Trauma Center for about 4 years, I have a slight peek into working with families that are dealing with the sudden passing of a loved one.

The book revolved around Marin County Coroner Ken Holmes as he discusses with the author his most fascinating and famous cases. The book is written almost in an interview form where Ken is telling his stories. Each chapter is a new large case with a few smaller ones scattered in. The saddest case for me, as a mother of three, was the small child and mother that was killed by his father and put in the freezer until the father could dispose of the bodies by tossing them in the bay. The crack in the case was the ice crystal formation in the muscle tissue that was seen under the microscope. Ken talks about helping to get the suicide prevention netting in place on the Bay Bridge. The number of suicides off the bridge are staggering and something needed to be done. Ken says he remembers a German tourist who remained unidentified until a PI called him and asked if he had a missing person matching his description. Come to find out the man had told all of his family that he was leaving and going to go and kill himself by jumping off the bridge in San Fransisco. No one really believed him. Ken was just happy that he was able to return a missing person to his family overseas even if it was in the less than happy circumstances. Ken tells the author all about his education and his rise through the ranks to eventually become the head cheese so to speak. It wasn’t until he refused to release an apology for stating the truth in a case, that he had even contemplated retirement. Now he is happily enjoying retirement, driving fast cars and doing the occasional referral.

This book was nothing like I thought. I wasn’t expecting interview form. I thought it would be a lot more informative than it was. It delves more into education and how he advanced his career and did things more than telling the stories of his cases. While each chapter does have cases, that is not the only thing that is talked about. The training he had to take and the way he had to break the news to the family. The blurb when I requested it was that it was reminiscent of the book Working Stiff which I have read and reviewed as well. While I agree that the subject matter is similar, the writing style is totally different. I did like the book. It was good and was definitely educational. It just wasn’t exactly what I was expecting.

Stay-at-home mom to two children and one toddler. I love to read, travel (haven't done it in a while), and cook. Born and raised in Three Rivers, Michigan and currently, reside in Northern Michigan. Can't wait to start sharing my book thoughts/ reviews with you!!
Previous BOOK REVIEW: Girl In Snow by Danya Kukafka
Next BOOK REVIEW: The Green Reaper: Memoirs of an Eco-Mortician by Elizabeth Fournier