The Lovely Bones is the story of a family devastated by a gruesome murder — a murder recounted by the teenage victim. Upsetting, you say? Remarkably, first-time novelist Alice Sebold takes this difficult material and delivers a compelling and accomplished exploration of a fractured family’s need for peace and closure.

The details of the crime are laid out in the first few pages: from her vantage point in heaven, Susie Salmon describes how she was confronted by the murderer one December afternoon on her way home from school. Lured into an underground hiding place, she was raped and killed. But what the reader knows, her family does not. Anxiously, we keep vigil with Susie, aching for her grieving family, desperate for the killer to be found and punished.

Sebold creates a heaven that’s calm and comforting, a place whose residents can have whatever they enjoyed when they were alive — and then some. But Susie isn’t ready to release her hold on life just yet, and she intensely watches her family and friends as they struggle to cope with a reality in which she is no longer a part. To her great credit, Sebold has shaped one of the most loving and sympathetic fathers in contemporary literature.

I have had this book sitting on my to be read shelf for a few months but had never taken the plunge to read it, since it’s not normally something that I would read.  Suspense/Thrillers are not really my cup of tea however when my friend/co-editor, Kristin, decided that we wanted to start a book club and got our first genre picked out I knew that I had to suggest this book to read since, honestly, it was the only book that I had that was of that genre.

Susie Salmon was murdered on December 6, 1973.  Her young life was cut short by her neighbor, Mr. Harvey.  She was running late on that fateful night and cut through a cornfield.  He lured her into the bunker he built into the cornfield that bumped up to the back of the neighborhood. There he raped and murdered her.  He then cuts her body into smaller pieces that he stuffs into a safe and tosses that into a local sinkhole.  Her family is beside themselves with grief when Detective Len comes and notifies them of her disappearance.  The family still holds out hope that she is alive.  The police interview several people and have a suspect in a boy who kissed her and wrote her love notes.  He, however, has an alibi.  He was speaking at a local college.  Once again they are at a dead end.  It takes 8 years before they even get a whiff of who may have done it but it is never fully solved.  Susie’s father Jack believes that he knows who killed her but the police don’t believe him.  They have already checked Mr. Harvey out and cleared him. How will Susie’s family cope with her loss?  Will the police finally believe Susie’s father and agree that Mr. Harvey killed Susie?

This book was so powerful.   I cried a few times while reading it.  I loved the POV, it was so interesting.  Who would have thought to write a book from the view of the murdered girl?  Throughout the book we slowly see the family fall apart.  The sister withdraws inside herself.  Her father becomes obsessed with finding her killer.  Her mother runs away.  Her brother was only 4 at the time so he really doesn’t understand what is going on.  The book shows that peoples lives are not sunshine and roses.  There is life, death, and everything in-between.    It shows that families under stress handle it in a different way.  It shows a town that, when struck with something tragic, pull together but over time they slowly forget.  I know that the movie wasn’t exactly well received but I still can’t wait to watch it.

Pick up your copy of The Lovely Bones by Alice Sebold on Amazon, Barnes and Nobles, or check your local bookstore. Also make sure to add it to your To Reads list on Goodreads and leave feedback for the author when you are finished.

Stay-at-home mom to two children and one toddler. I love to read, travel (haven't done it in a while), and cook. Born and raised in Three Rivers, Michigan and currently, reside in Northern Michigan. Can't wait to start sharing my book thoughts/ reviews with you!!
Previous BOOK REVIEW: One of Us Is Lying by Karen M. McManus
Next BOOK REVIEW: The Night Circus by Erin Morgenstern 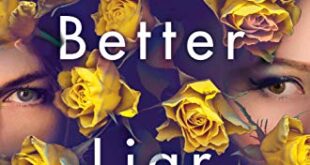