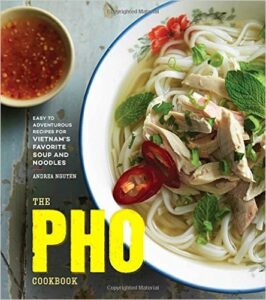 Vietnam s most beloved culinary export pho is now within the reach of any home cook.
Andrea Nguyen first tasted pho in Saigon as a child, sitting at a street stall with her parents. That experience sparked a lifelong love of the iconic noodle soup, and here she dives deep into pho s lively past, visiting its birthplace and then teaching how to successfully make it. Options range from quick weeknight cheats to 5-hour weekend feasts with broth and condiments from scratch, as well as other pho rice noodle favorites. Over fifty versatile recipes, including snacks, salads, companion dishes, and vegetarian and gluten-free options, welcome everyone to the pho table. With a thoughtful guide on ingredients and techniques, plus evocative location photography and deep historical knowledge, “The Pho Cookbook “enables anyone to cook this comforting classic.

I love trying new recipes and cooking things outside of my comfort zone. You should see my physical cookbook collection. I have cookbooks ranging from Scandinavian to Greek to Thai. While I like to cook pretty much anything, I usually gravitate to Asian for some reason. My family likes it and it’s not unusual for us to have Pad Thai or Fried Rice a few times a month. So when I saw this Pho Cookbook up for review I knew I had to request it. While Pho is something I knew about it was something that I had never attempted to make. We were not disappointed. It is something that I will be adding to my monthly menu planning.

The cookbook breaks Pho down into multiple sections. Each one more adventurous than the next. A quick flip through told me there were not just soup recipes in it. I quickly decided to make a soup dish and a non-soup dish as a starter into the cookbook. The next thing was the decide the soup. I chose a Quick Beef Pho. It looked tasty, quick and was one of the few that didn’t require beef bones to be cooked down or a pressure cooker. The smell that filled my house while it was cooking was AMAZING. The smell of fresh ginger mixing with cinnamon, clove and star anise is one that needs to be smelled by everyone at some point in their lives. The name quick is a slight misnomer. It took roughly 40-45 minutes to make it from beginning to end. There is a 30-minute simmer in the middle which allows you the freedom to go do something else, say fold laundry. The Quick Beef Pho was a huge hit with my family. My children did pick the green onions and cilantro out but that was to be expected. While they are pretty good eaters, green floaty things aren’t high on their list. The other recipe I cooked was a Beef Pho Bahn Mai sandwich. I cooked it for a family get together. Boy, was that a huge hit. I used the alternative cooking method of the oven since my mother doesn’t own a pressure cooker that can be used to cook food like that. Again, the smell of the cinnamon, cloves, ginger, and star anise filled the house. It was mouth watering. I cooked the meat in a dutch oven for 2 hours and stirred it at the halfway point. The meat came out fall apart tender. Everyone went back for seconds. My 3 year old inhaled her sandwich so fast I was afraid she wouldn’t stop at her fingers. All in all, both recipes were easy to prepare and were exceptionally delicious. I will be making both of these in the future and trying some of the other recipes as well.

I gave this cookbook 5 stars. The cookbook was well designed and easy to understand. The only thing that might make it less accessible for some people is the type of ingredients and cooking methods. Most of the recipes called for lamb bones or beef bones to make a broth with. I live in Northern Michigan where the nearest place for me to get good quality things like that is not just a quick jaunt down the road. With a quick glance back through the cookbook most recipes call for Star Anise. A .5oz bottle at Meijer costs $8.00+, while its a one time cost until you need more it’s still a steep price. Also, a fair amount of the recipes calls for a pressure cooker to speed up the process. I do not own one and it’s not something that is readily available in most homes in my opinion. Some of the recipes she does give an oven opinion and how to do it that way, but it’s at the end and under a NOTE: section. Don’t get me wrong, I loved this cookbook and I will be using it regularly but just something to keep in mind if you are thinking about purchasing this book.

A copy of The Pho Cookbook by Andrea Nguyen is available on Amazon and Barnes and Noble. You can also find it at a bookstore near you. Andrea Nguyen also has multiple other cookbooks that you can try out so make sure to check them out! You can add The Pho Cookbook to your Goodreads To Read list and leave feedback for the author when you have tried out a couple recipes.

Stay-at-home mom to two children and one toddler. I love to read, travel (haven't done it in a while), and cook. Born and raised in Three Rivers, Michigan and currently, reside in Northern Michigan. Can't wait to start sharing my book thoughts/ reviews with you!!
Previous BOOK REVIEW: Escaping the Nazis on the Kindertransport by Emma Carlson Berne
Next BOOK REVIEW: Piper Perish by Kayla Cagan