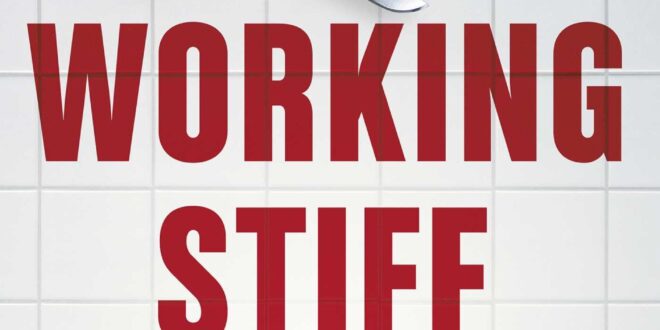 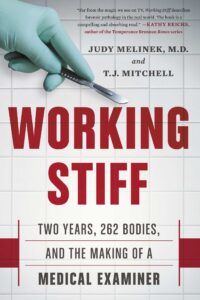 SYNOPSIS: (From Goodreads)
The fearless memoir of a young forensic pathologist’s rookie season as a NYC medical examiner, and the cases, hair-raising and heartbreaking and impossibly complex, that shaped her as both a physician and a mother.

Just two months before the September 11 terrorist attacks, Dr. Judy Melinek began her training as a New York City forensic pathologist. With her husband T.J. and their toddler Daniel holding down the home front, Judy threw herself into the fascinating world of death investigation, performing autopsies, investigating death scenes, counseling grieving relatives. Working Stiff chronicles Judy’s two years of training, taking readers behind the police tape of some of the most harrowing deaths in the Big Apple, including a firsthand account of the events of September 11, the subsequent anthrax bio-terrorism attack, and the disastrous crash of American Airlines flight 587.

Lively, action-packed, and loaded with mordant wit, Working Stiff offers a firsthand account of daily life in one of America’s most arduous professions, and the unexpected challenges of shuttling between the domains of the living and the dead. The body never lies, and through the murders, accidents, and suicides that land on her table, Dr. Melinek lays bare the truth behind the glamorized depictions of autopsy work on shows like CSI and Law and Order to reveal the secret story of the real morgue.

Dr. Judy Melinek deals with death daily. She started out in Medical School as a Surgeon, but a series of events revolving around exhaustion and the crazy amount of work hours required caused her to rethink her career path and quit her residency. After she quit, she realized that she liked and had excelled at Forensic Pathology portion of Med School. She contacted a friend and did her Forensic Internship with her. She then applied for a Fellowship with the Office of the Chief Medical Examiner in New York City. She got the position and then began the final part of her journey to become a Medical Examiner.

The book describes how she learned her job and some of her more interesting cases. All of her cases are heartbreaking but none compare to reading the chapter of her describing what it was like doing the Post-Mortem exams on the victims of 9-11.

All in all, a well written book by a women who honestly loves her job. I read this book right after my sister died and it gave me some peace knowing that there are people out there in the world who speak for the dead when they cannot speak for themselves.

You can pick up your copy of “Working Stiff” on Amazon and Barnes and Noble or in a store near you. Add it to your TO READ list on Goodreads! Tweet us and let us know what you think of the book once you read it!

Stay-at-home mom to two children and one toddler. I love to read, travel (haven't done it in a while), and cook. Born and raised in Three Rivers, Michigan and currently, reside in Northern Michigan. Can't wait to start sharing my book thoughts/ reviews with you!!
Previous BOOK REVIEW: “Swerve” by Vicki Pettersson
Next BOOK REVIEW: “Scream” by Stacey R. Campbell