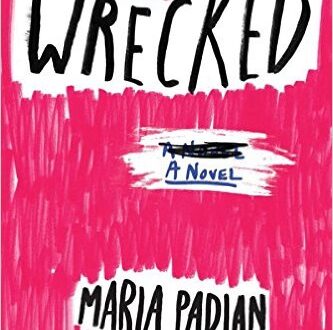 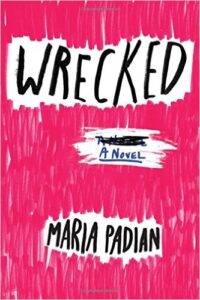 Everyone has heard a different version of what happened that night at MacCallum College. Haley was already in bed when her roommate, Jenny, arrived home shell-shocked from the wild Conundrum House party. Richard heard his housemate Jordan brag about the cute freshman he hooked up with. When Jenny formally accuses Jordan of rape, Haley and Richard find themselves pushed onto opposite sides of the school’s investigation. But conflicting interests fueling conflicting versions of the story may make bringing the truth to light nearly impossible–especially when reputations, relationships, and whole futures are riding on the verdict.

Marian Padian touched on a subject with “Wrecked” that a lot of authors wouldn’t even go near. Rape on college campus is a big hot topic issue right now and Padian did a great job of showing how,w while colleges try to help the victim, sometimes it doesn’t look that way or turn out that way. However, there were a few things that tripped me up while reading.

The story follows Haley and Richard, two college kids who are quickly pulled into to a cry of rape by people they know. While they just want to help, they also are torn by not wanting to get involved, especially when they aren’t exactly friends with the individuals they want to help.

Wrecked was a great story that flowed quickly. It was easy to read and kept me interested. However, the part that kept me interested was not the rape story line. While this was a small focus in the story over all, the story formed between Haley and Richard was far more the center focus, in my opinion. I don’t know if that was the case, but it wasn’t even the conversations about the case with their friends, but their growing relationships throughout. We witnessed outings, conversations, school activities, but only about a third of the book was actually directly about the allegations one girl made about rape. I felt that with a synopsis centered around a cry of rape, we heard a lot more about other stuff.

With that being said, I really enjoyed the story line that developed outside the “main” story line of the rape case and I enjoyed watching how such a case would unfold. So while the odd side story line that turned into a big part of the book threw me off for a minute, i still enjoyed the book and would recommend it to anyone looking for a dramatic read with some love stories, bromances, new friendships, and lots of feelings. I give it a solid 4 out of 5 stars.

Wrecked by Maria Padian is available through Amazon and Barnes and Noble on October 4, 2016. You can also check your local book retailer for a copy. Make sure you add it to your To Reads list on Goodreads and leave your feedback for the author when you finish. You can also learn more about author Maria Padian on her website HERE and pick up more of her books.

Super Mom and Awesomely Nerdy Lady who can’t stand to sit still. I ran a successful online radio show that brought fans up close and personal with their favorite music, television and movie stars. Now, with my hilariously nerdy partners in crime, I have turned to my first love, BOOKS! A lover of books from a young age, I now always have a book on me no matter where I go. Books are my therapy. Twitter: @Kristin_Downer
Previous BOOK REVIEW: Last Seen Leaving by Caleb Roehrig
Next BOOK REVIEW: To Say Goodbye by Lindsay Detwiler