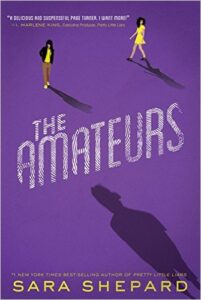 I need some answers about my sister. Help…

Five years ago, high school senior Helena Kelly disappeared from her backyard in Dexby, Connecticut, never to be heard from again. Her family was left without any answers—without any idea who killed Helena, or why.

So when eighteen-year-old Seneca Frazier sees a desperate post on the Case Not Closed message board, she knows it’s time to change that. Helena’s high-profile disappearance is the one that originally got Seneca addicted to true crime. It’s the reason she’s a member of the site in the first place.

Determined to get to the bottom of the mystery, she agrees to spend spring break in Connecticut working on the case with Maddy Wright, her best friend from Case Not Closed. However, the moment she steps off the train, things start to go wrong. Maddy’s nothing like she expected, and Helena’s sister, Aerin, doesn’t seem to want any help after all. Plus, Seneca has a secret of her own, one that could derail the investigation if she’s not careful.

Alongside Brett, another super-user from the site, they slowly begin to unravel the secrets Helena kept in the weeks before her disappearance. But the killer is watching…and determined to make sure the case stays cold.

Sara Shepard is well known for her Pretty Little Liars series. Having never read any of them, but having watched the TV show based on the books, I was very intrigued when I heard Shepard was releasing a new series that was similar to Pretty Little Liars, but a bit more murder/mystery crossed with the always loved drama of a YA Fiction.

The Amateurs follows Seneca Frazier as she heads a little away from home and partners up with some like-minded individuals with the same goal; find Helena Kelly’s murderer. Sounds pretty straight-fowrard, aside from the fact that these are teenagers with no actual policing backgrounds, similar back stories or parts of their lives they don’t talk about much, and the murder they are investigating is cold… as ice.

My absolute favorite part of The Amateurs are the characters. There is a wide array of personalities, backgrounds, life tragedies, and social classes mixed into the main characters in this book. There is literally someone for every single reader to relate to. The characters, such as Seneca, are mysterious to the reader because they all hold close their own little secrets that keep you guessing. Shepard also did an amazing job of absolutely shocking me with the ending. You will never guess how it ends. As a fan of murder/mysteries, it is hard to surprise me but Shepard did it. The writing in this book flows smoothly and kept me turning the pages as quickly as my eyes could read. For anyone looking for an easy read with lots of depth, twists, and shocking surprises then pick up The Amateurs by Sara Shepard. Five out of five stars.

Pick up your copy of the Amateurs, out now, from Amazon or Barnes and Noble. You can pick it up from your local bookstore as well. Make sure to add it to your To Reads list on Goodreads and make sure to leave feedback for the author when you are done. You can follow author Sara Shepard online at her site HERE and follow her on Twitter.

Super Mom and Awesomely Nerdy Lady who can’t stand to sit still. I ran a successful online radio show that brought fans up close and personal with their favorite music, television and movie stars. Now, with my hilariously nerdy partners in crime, I have turned to my first love, BOOKS! A lover of books from a young age, I now always have a book on me no matter where I go. Books are my therapy. Twitter: @Kristin_Downer
Previous BOOK REVIEW: The Homecoming by Stacie Ramey
Next BOOK REVIEW: Not Tonight, Josephine: A Road Trip Through Small-Town America by George Mahood