BOOK TO MOVIE REVIEW: The Help by Kathryn Stockett

Before I go any further in this book to movie review, let me just say I am embarrassed to say that I only just read the book a few weeks ago.  I watched the movie when it came out and didn’t even realize it was a book.  I did however by the book right away and then sadly it sat in my to be read piles for (cough) years.

I recently watched the movie with my kids a week or so before I started the book and they liked it.  (I then rewatched it just this morning so I could compare once again now that I had to book read).  They were upset when we told them why they were treating Minny and Aibileen poorly.  They went to school the next day saying “you is kind, you is smart and you is important”.  If they took anything away besides the treatment of blacks I hope it is that.  The movie follows the book almost to a T.  There are a few things in the book that I wished they had left.  Like the naked white man stroking his penis as Minny tells him to leave the property. He then beats her and her employer Miss Celia Foote beats the ever-lovin’ snot out of him with a fireplace poker.  Granted they cannot show the nudity but they could have worked around that.  I wish that they would have kept in Miss Skeeter getting proposed to then dumped when she admitted to Stuart that she was the one who had written the book that everyone was talking about.  The last thing I wish they had left in the movie from the book was the chat show with the women’s college sorority sister talking about the book and promoting it.  I thought it was a funny part and really helped the book sales.

They did a very good job of bringing each of the characters to life.  Miss Skeeter was exactly how I imagined her although I think in my mind her hair was a little more wild and crazy.  Her mother was played by the perfect actress.  Alison Janney brought the mother to life.  Tall and elegant and struggled to tame her daughter and get her married off.  They did an excellent job of maintaining the underlying racism and servitude that the blacks had to endure until well into our current time.  At times it was serious, with the building of separate bathrooms because the blacks may give them a disease.  Other times it was light-hearted, with Minny baking her former employer a chocolate shit cake.  It touched on abuse with Minny’s husband as well as miscarriage with Miss Celia and how she dealt with it by burying and planting a rose bush in her back yard.  It gave each of these women the strength to do something.  With Minny, she finally left the abusive husband.  Miss Celia got the strength to tell her husband about all the babies.  With Aibileen she finally became the writer her son knew she would be.  All in all, definitely watch the movie but also read the book it gives so much more to the movie after you have. I will be watching the movie time and time again.

Stay-at-home mom to two children and one toddler. I love to read, travel (haven't done it in a while), and cook. Born and raised in Three Rivers, Michigan and currently, reside in Northern Michigan. Can't wait to start sharing my book thoughts/ reviews with you!!
Previous BOOK REVIEW: The Final Deception by Heather Graham
Next ARTIST SPOTLIGHT: Jenny Dee 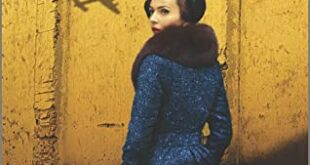