BOOK TO MOVIE: The Boy in the Striped Pajamas

The Boy in the Striped Pajamas by John Boyne follows the story of a young boy who lives near the Auschwitz Concentration Camp with his family as his father is a soldier in the Nazi army.

The first little difference is that they never say Auschwitz. It’s assumed, but Bruno calls it Out-With. Maybe there is some issues with using the name, but I think it just goes with my next opinion. While there are a lot of little differences in the book and movie, I feel the biggest likeness is that Bruno is very naive. Although he is young, it would make sense that he knows about why the Jews were kept in camps and how Germans felt the Jews were inferior to them in many ways. In the book and movie, however, Bruno seems very oblivious to this fact. He doesn’t understand why the “farmers” are wearing “pajamas” all day. He doesn’t understand why they are behind the fence or why his new friend behind the fence is so hungry all the time, or why he is not allowed to give him food. He regularly talks about how he is jealous because his friend talks about all the kids on his side of the fence and Bruno wants to play with kids because he had to leave his home and his friends to move to this new place far away.

In the book, Bruno’s father seems a bit harsher towards him, whereas in the movie he has a soft spot for Bruno it seems. I think maybe this difference is just a matter of the film being an easier avenue to project physical affection, rather than writing it out.

I also feel that in the movie we get a lot more of Bruno’s mom’s true feelings. She gives a lot of looks, but keeps quiet in the book, whereas in the film we get to see those looks of concern and her being unsure of all that is going on around her. I feel that added a lot to her character who is generally more quiet in the book.

Overall, I feel the transfer of this story from book to movie was done well. The actors chosen were fantastic and the movie was kept closely to that of the book and the writers true intentions when writing it. It’s a heartbreaking story that was reality for many and I’m glad I got to experience it both on page and on big screen. I highly recommend it to all.

Super Mom and Awesomely Nerdy Lady who can’t stand to sit still. I ran a successful online radio show that brought fans up close and personal with their favorite music, television and movie stars. Now, with my hilariously nerdy partners in crime, I have turned to my first love, BOOKS! A lover of books from a young age, I now always have a book on me no matter where I go. Books are my therapy. Twitter: @Kristin_Downer
Previous BOOK REVIEW: The Girl from the Chanel Islands by Jenny Lecoat
Next BOOK REVIEW: The Kitchen Front by Jennifer Ryan 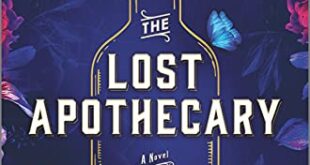