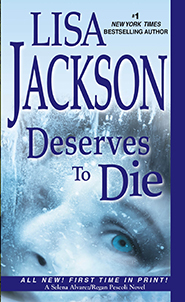 Lisa Jackson is known for her suspense and downright terrifying storytelling. ‘Deserves to Die’ is exactly the type of work to expect from Jackson, spectacular!

The story follows Detective Alvarez and Pescoli, two police officers in the small town of Grizzly Falls, Montana. Each fielding problems and obstacles in their personal lives, they are both drawn into a new case where a woman is found in stream… dead… and missing her left ring finger. As the duo tries to solve this crime, another body pops up. This one of an out-of-towner, whom nobody knows and is also missing her left ring finger.

During the book, you also get to see glimpses of Troy Rider. Ryder is in search of a young woman name Anne-Marie Calderone. Her father has sent Ryder to find her and bring her back to Louisiana, but are his intentions good? And as we watch Anne-Marie fake her appearance and be Jessica at a local Grizzly Falls diner, are we rooting for her or those after her?

While reading this book I found myself frustrated, but not in a bad way. Jackson definitely keeps you guessing. I always have a character from the beginning that I am rooting for to come out on top. Aside from Alvarez and Pescoli, who are incredible women in law enforcement that you are constantly cheering for as they make their way through the loss of their Sheriff and a new one taking his place, I wasn’t sure who I wanted to win. Anne-Marie is made out to be a vicious liar from many in pursuit of her, yet you can tell there is an underlying story. A reason she is the way she is.

The plot thickens and explodes as the book comes to an intense stand-off between Anne-Marie and two men from her past. Jackson found a way to tell a story with a lot of details in a way that did not bore me in any way. The characters were intriguing and making you want more and the I had a hard time pausing for normal life duties because I simply wanted an answer. The need to know the outcome of this book is enough to make it an easy page-turner and one you can’t simply put down.

If thriller/suspense is your type of book, Lisa Jackson is an absolute must read. ‘Deserves to Die’ proves Jackson is still at the peak of her career and a front runner in this genre. Everyone should read this book and her other work. Definitely a great one. I personally cannot wait until her next release.

Super Mom and Awesomely Nerdy Lady who can’t stand to sit still. I ran a successful online radio show that brought fans up close and personal with their favorite music, television and movie stars. Now, with my hilariously nerdy partners in crime, I have turned to my first love, BOOKS! A lover of books from a young age, I now always have a book on me no matter where I go. Books are my therapy. Twitter: @Kristin_Downer
Previous BOOK REVIEW: ‘Where She Went’ by Gayle Forman
Next BOOK REVIEW: ‘Family Meals’ by Chef Michael Smith