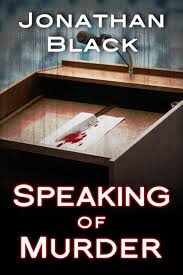 SYNOPSIS: (From Goodreads)
After a divorce and an early retirement from newspaper reporting, Hank Fowler’s life is back on track he has a girlfriend, steady freelance work, a teaching job that is, until he gets a call from his old pal Chris Beckwith. Beckwith, his college roommate and a former drug-addict turned motivational speaker, is found dead not too long after. Following up on Chris’s sudden death, Hank begins to unravel a series of gruesome murders, all involving motivational speakers.

Meanwhile, Rachel, newly divorced and trying to write a book, enrolls in Hank s writing class. With her help, Hank must track down the killer before the killer tracks him. In this suspenseful and tightly woven narrative, Jonathan Black creates a fast-paced murder mystery for the digital age. An homage to Chicago, Speaking of Murder is a noir whodunnit and a gripping read for lovers of the mystery genre.”

REVIEW:
Right away “Speaking of Murder” intrigued me. I love stories that revolve around a set of people I have never personally encountered. Motivational speakers! Murder! Those two are definitely two categories I have never even imagined putting together, but Jonathan Black did it… and well!

‘Speaking of Murder’ revolves around Hank Fowler, ex-investigative reporter, current not-so-happy-with-his-job travel writer, and part time professor. When a friend of his winds up in a bad situation, Hank finds himself touching on some of his previous talents to find out what is going on. A small crisis turns into a huge ordeal with a lot of hidden corners and twists along the way.

Black did an incredible job with this book. Going from motivational speaker and writer to mystery fiction writer is an impressive feat in itself, but this book stood out to me. As a huge fan of murder/mysteries, ‘Speaking of Murder’ nailed all the things I look for. Intrigue, great characters and character development, twists and turns, and I was not able to guess the ending. Black took his knowledge of the world of motivational speaking and put a sick and twisted spin on it. Hank and Rachel are both characters I can imagine readers relating to, seeing as most people have gone through a job loss, a divorce, a messy breakup, or a few bad decisions. Major props to Black for bringing these characters to life.

I highly recommend this book to any mystery reader… or anyone who enjoys good books really. Five out of five stars.

Make sure to pick up ‘Speaking of Murder’ on Amazon and add it to your TO READ list on Goodreads!

Super Mom and Awesomely Nerdy Lady who can’t stand to sit still. I ran a successful online radio show that brought fans up close and personal with their favorite music, television and movie stars. Now, with my hilariously nerdy partners in crime, I have turned to my first love, BOOKS! A lover of books from a young age, I now always have a book on me no matter where I go. Books are my therapy. Twitter: @Kristin_Downer
Previous BOOK REVIEW: ‘Gone Too Far’ by Natalie D. Richards
Next BOOK REVIEW: “The Gay Groom’s Guide” by Robert Blackmon