***SPOILER ALERT***
IF YOU ARE NOT CAUGHT UP WITH OUTLANDER THIS SEASON, TURN BACK NOW. SPOILERS ARE AHEAD. 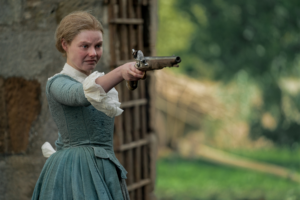 Jamie and Claire are returning Young Ian home to Lallybroch. They all look slightly nervous to be facing the wrath of Ian and Jenny. I mean who can blame them!

Once they are home, Jenny and Ian give Jamie and Young Ian a tongue lashing they won’t soon forget. Ian thinks Young Ian needs a butt whipping against the fence post. Jamie talks them into allowing the boy to make cow dung pies for the fire instead.

Jenny is being pretty crappy to Claire. Introducing her to the kids as someone who “used to live here”. The amount of snark and bitchiness radiating off of Jenny the whole episode is pretty palpable. Jenny is also well aware that the story they are telling them about Claire’s disappearance for 20+ years is totally a lie. She tells Jamie that the Claire she knew would just not give up on searching for Jamie like she did.

When Claire and Jamie go to bed later, Jamie tells her about the Silkie Island treasure and how he went looking for her after hearing the story from Duncan when he was in prison. How he swam the quarter of a mile in freezing cold water and pulling currents. While he didn’t find her, he did find treasure after all. He swam back to the mainland and then turned himself back into the prison.

Just as Jamie and Claire are going to kiss, into the room bursts two little girls shouting “DADDY?” Oh man, now the other shoe will drop! I have been waiting for this! Here comes Laoghaire. BOOM!!! Jamie is married!!! To HER!!!!! Now the sparks really fly! Claire is understandably upset. This is the women that had her arrested and tried for being a “witch”. Jamie and Claire have a huge knock down drag out fight about this. Claire is grabbing her clothes to pack up and leave. The more they fight with each other they more they get all hot and bothered with each other. Eventually, they are ripping at each other’s clothes and wildly kissing. That all comes to a screeching halt when Jenny comes and dumps a pitcher of water on them.

Jenny and Claire have a heated discussion downstairs in front of the fire. Claire tells her about having a husband in the colonies that has since died. She tells Jenny that she didn’t have any babies with her husband but she still doesn’t tell Jenny that she had a baby with Jamie. She still keeps that part a secret. Jenny seems to have less anger towards her after they clear the air. Back upstairs, while picking up the pottery, Ian tells Jenny she needs to stop meddling. All she wants is Jamie to be happy and he is now that Claire is back.

Claire is visibly still pretty angry at Jamie for not telling her that he got remarried. Suddenly, Laoghaire is at the gate carrying a pistol. She appears to accidentally shoot Jamie in the arm with birdshot. That is a big step away from the book. Claire isn’t around in the book and Laoghaire doesn’t accidentally shoot him. Claire rushes Jamie inside and goes to work on removing the birdshot. Young Ian asks if she needs anything. He still calls her Auntie which she loves. She tells him that he is the only one that calls her that. She manages to remove all the little bullets.

Jamie tells Claire all about why he married Laoghaire. He felt sorry for her in a way. She had two young children, Marsali (don’t forget about her she will be important later) and Joan, and two husbands that have died. He tells her about the dance and dancing with the girls and that it was the first time he has actually really belly laughed in 20+ years. While Jamie is talking she notices he is getting winded and fidgity. She feels his forehead and he has a raging fever. She pulls out her trusty penicillin that she has brought with her from the future. The look on his face when she stabs him in the arse with the needle is rather priceless.

Ned Gowan comes and helps Jamie and Claire figure out their whole first marriage second marriage thing. Laoghaire wants, for that time, a stupid amount of money for pain and suffering. Jamie, being the honorable man that he is, agrees to the terms. He has an idea how to get the money. He tells Jenny and Ian about Silkie Island and the treasure that is on it. Young Ian walks by and volunteers to swim across since Jamie’s arm is not in any condition to use. Jamie and Claire ask permission to take Young Ian with them this time. Jenny and Ian grant their request and off they go.

While Jamie and Claire are waiting for Young Ian to swim over and back from the island, Claire tells him she doesn’t know if they are going to be together or should be. Jamie refuses to accept it. They are like birds, they mate for life. He asks her if she is willing to accept the man he is now for the man he used to be. Claire is still pretty angry about the marriage but in the end, she accepts him.

Suddenly from around the edge of the island, they see a rowboat and then a tall ship appears. They kidnap Young Ian and sail away before Jamie and Claire can even get to the base of the cliffs. Jamie acts like he is going to jump in the water and swim after it but Clarie stops him and reminds him of his shoulder.

The ending to this episode was by far my favorite. It totally set up the whole next few episodes where, if you have read the books, you know they should probably spend it on the high seas. They did an excellent job of showing how crappy Jenny was to Claire. They really brought that part of the book to life. I was kind of disappointed about how they did the getting shot in the arm part. Claire was riding through the woods and camping and Ian had to come and get her and bring her home in the book so that she could care of Jamie. Having her standing right next to him in the show just felt a little flat. I cannot wait to see the next episode and how they transition from land to sea. What are you excited to see? Did you think the way they showed the Laoghaire confrontation (all of them including the shooting) was good or was it lacking something?

Stay-at-home mom to two children and one toddler. I love to read, travel (haven't done it in a while), and cook. Born and raised in Three Rivers, Michigan and currently, reside in Northern Michigan. Can't wait to start sharing my book thoughts/ reviews with you!!
Previous SPOTLIGHT: Alone by Cyn Balog
Next BOOK REVIEW: Poison by Galt Niederhoffer