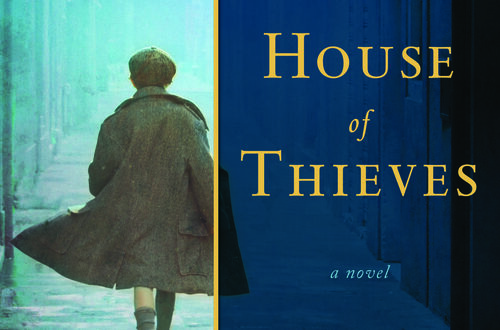 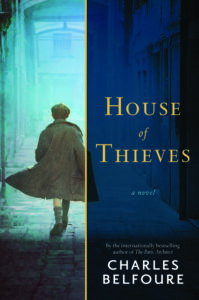 SYNOPSIS: (From Goodreads)
The Debt Must Be Repaid — or Else

In 1886 New York, a respectable architect shouldn’t have any connection to the notorious gang of thieves and killers that rules the underbelly of the city. But when John Cross’s son racks up an unfathomable gambling debt to Kent’s Gents, Cross must pay it back himself. All he has to do is use his inside knowledge of high society mansions and museums to craft a robbery even the smartest detectives won’t solve. The take better include some cash too —the bigger the payout, the faster this will be over.

With a newfound talent for sniffing out vulnerable and lucrative targets, Cross becomes invaluable to the gang. But Cross’s entire life has become a balancing act, and it will only take one mistake for it all to come crashing down —and for his family to go down too.

REVIEW:
**A copy of this book was provided through Netgalley by the publisher in exchange for an honest review.**

‘House of Thieves’ intrigued me from the start. Not only was it about murder, suspense, and mystery (my three favorite topics in a book), but it also gave a glimpse into the world of the late 1800’s in New York. Charles Belfoure tell us a twisted story of family, sacrifice, and bad decisions surrounded a well-to-do family.

George Cross was a new graduate from Harvard, the perfect family, well off, and the future at his fingertips. As we know, though, life is not always as it seems. Not even family can save you all the time. “House of Thieves” follows a family who has a lot of hidden secrets and some have to make decisions that would severely damage their reputation if gotten out, let alone their freedom (can we say prison time!), but also the love they have for one another. John Cross, a local architect, has been given an ultimatum of saving his son, George, from gambling debt by helping the mob pull off a string of robberies in buildings he helped create or allowing them to kill his son. Not an easy decision.

I loved this story line. The mob is known for doing things unbecoming of most people, but this story pushes those limits to new borders. I felt the beginning of the story was very compelling and well written. It flows smoothly from one point to the next, even while you jump from character to character. However, I did notice as the story progressed that more and more “bad stuff” was happening. More of the family stepped into a darker version of themselves. It almost became too much. I thought if it as a sort of “if something bad can happen, it will” vibe. Too many bad things and bad choices were being made that it was on the verge of being unbelievable. I love stories I feel can really happen and as “House of Thieves” progressed I felt this was taken away a bit. Sometimes less is more. With that being said, the story had a nice arch from beginning to peak and back down to ending. The characters were dark and mysterious… and sometimes downright evil. I definitely found myself having strong emotions (and not necessarily good ones) towards a few of the characters. I love when a story can draw out emotions in me and Belfoure managed to do this with his well written and developed characters.

If you are a fan of historical thrillers, “House of Thieves” is right up your alley. A few small changes would have made it better, but overall a good read. Belfoure has many more historical themed books out and I’d be interested to see how I like them.

“House of Thieves” can be purchased now at Amazon . Also make sure to add it to your TO READS list on Goodreads. You can also check out Charles Belfoure, a New York Times bestselling author, on his website HERE!

Super Mom and Awesomely Nerdy Lady who can’t stand to sit still. Delving into the online world I ran a successful online radio channel and blog that brought fans up close and personal with their favourite music, television and movie stars. Now, with my hilariously nerdy partners in crime, we are hiding our nerdyness no more! Twitter: @Kristin_Downer
Previous BOOK REVIEW: “Desolation Sound” by Fraser C. Heston & Heather J. McAdams
Next BOOK REVIEW: “The Lost Girl” by R.L. Stine