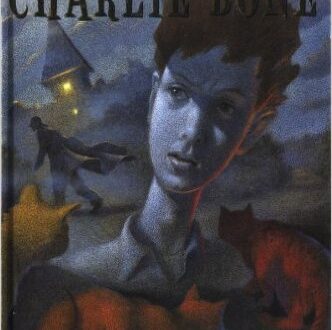 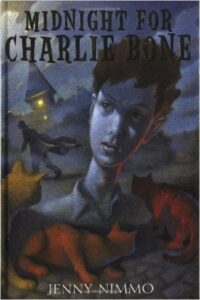 SYNOPSIS: (From Goodreads)
A magical fantasy that is fast-paced and easy-to-read. Charlie Bone has a special gift- he can hear people in photographs talking!

The fabulous powers of the Red King were passed down through his descendants, after turning up quite unexpectedly, in someone who had no idea where they came from. This is what happened to Charlie Bone, and to some of the children he met behind the grim, gray walls of Bloor’s Academy.

His scheming aunts decide to send him to Bloor Academy, a school for geniuses where he uses his gifts to discover the truth despite all the dangers that lie ahead.

Midnight for Charlie Bone by Jenny Nimmo is a fast-paced easy-read perfect for the pre-Harry Potter set. The writing is basic and simple; there are no large words or overly verbose dialogue. Charlie Bone is a typical pre-teen boy living with his mom and two grandmothers. His best friend, the rather dour Benjamin and his dog Runner Bean, live just across the street. Charlie’s life becomes anything but typical when he suddenly begins hearing voices of the subjects inside photographs. This discovery sends Charlie from one adventure to the next. While I liked Charlie, I was far more intrigued by his Uncle Paton–who randomly exploded light bulbs just by walking under them. Uncle Paton often bucked the system and did things his own way. He was debonair yet awkwardly so. Maybe it’s because I’m in my 30’s but Uncle Paton’s backstory and future were for more entertaining. If Jenny Nimmo ever decides to write an adult version of Uncle Paton’s story, I’ll be first in line to snatch it up.

Charlie Bone is appropriate for the elementary school set. My nine-year-old loved it; my sixteen-year-old didn’t. Harry Potter it is not, but I don’t get the sense Jenny Nimmo is striving to be the next JK Rowling. If you’re looking for something with more depth and plot, I would encourage you to skip this book. If you’re looking for a quick beach read, Midnight For Charlie Bone is one you won’t mind getting sandy. Even though Charlie Bone may not appeal to adults, children are sure to love Charlie and his friends–especially the fierce and true-to-herself Olivia. I give it 4 out of 5 stars–for the younger generation.

You can pick up your own copy of Midnight for Charlie Bone (Children of the Red King #1) online at Amazon or Barnes and Noble. Also add it to your To Reads list on Goodreads and leave feedback for the author when you are finished.