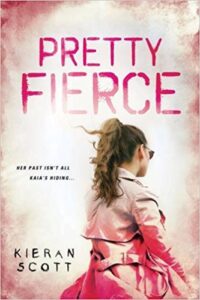 Kaia has been on the run her whole life. The daughter of professional assassins, she knows true danger—and she’ll do anything to survive. After her parents vanished during a job gone bad, Kaia’s spent the last year in hiding, trying to blend in as an ordinary teenager, and there’s no one who makes her feel more normal or more special than her boyfriend, Oliver.

But when she’s jumped by a hit man, and Oliver catches her fighting back, Kaia’s secret is exposed. In a split-second decision, she flees the small town, taking Oliver with her. With professional killers stalking their every move, can Oliver and Kaia protect each other long enough to uncover the mysteries of her past?

When I first started reading “Pretty Fierce” I was a bit worried because it sounded a little cheesy. Not enough to make me not want to read it, but I was slightly concerned it would be too much. While I do still believe it’s not as realistic as most books I choose to read, there was a great feel to this book that made you want to be a badass just like the main character Kaia. Because, let’s face it. That’s what she is.

This book centers around Kaia as she is managing her new life after being raised by professional assassins and being left abandoned. Her past quickly catches up to her though and turns her world upside down. She quickly finds herself on the run, dragging perfectly innocent people from her past with her. Queue beautiful jock boyfriend Oliver. Oliver is funny to me because he’s trying so hard to fit into this new reality he is facing as he learns Kaia’s secrets. He wants to be a part of her life, even if that means letting go of the “easy” life back home, which isn’t so easy. These two damaged teens kind of turn out perfect for each other.

As a new future unfolds around them, Kaia has to come to grips with some harsh realities about her parents and the life she’s always known. I think that can act as a comparison to real life. Sometimes, as we grow up we find that realities we once knew are not real and a new future takes shape. Author Kieran Scott took a slightly not realistic book and entertained us thoroughly, while giving comparisons to real life situations we may find ourselves in. Kaia is still a teenager and her emotions are very real to how we react to things.

Pretty Fierce is a good read for people who like action and trying to figure out a mystery. Kieran Scott gave us a “pretty fierce” read. I’ll be looking out for more from Scott in the future.

Pretty Fierce by Kieran Scott will be available April 4, 2017. You can pre-order now on Amazon and Barnes and Noble. You can also check with your local bookstores. Make sure to add it to your To Reads list on Goodreads for 2017 and leave feedback for the author. Kieran Scott also has many more books out. You can check those out HERE.

Super Mom and Awesomely Nerdy Lady who can’t stand to sit still. I ran a successful online radio show that brought fans up close and personal with their favorite music, television and movie stars. Now, with my hilariously nerdy partners in crime, I have turned to my first love, BOOKS! A lover of books from a young age, I now always have a book on me no matter where I go. Books are my therapy. Twitter: @Kristin_Downer
Previous BOOK REVIEW: The Confessions of Young Nero (Nero #1) by Margaret George
Next BOOK REVIEW: Who We Were by Lindsay Detwiler