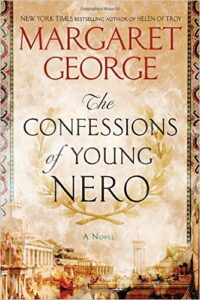 Built on the backs of those who fell before it, Julius Caesar’s imperial dynasty is only as strong as the next person who seeks to control it. In the Roman Empire no one is safe from the sting of betrayal: man, woman or child.

As a boy, Nero’s royal heritage becomes a threat to his very life, first when the mad emperor Caligula tries to drown him, then when his great aunt attempts to secure her own son’s inheritance. Faced with shocking acts of treachery, young Nero is dealt a harsh lesson: it is better to be cruel than dead.

While Nero idealizes the artistic and athletic principles of Greece, his very survival rests on his ability to navigate the sea of vipers that is Rome. The most lethal of all is his own mother, a cold-blooded woman whose singular goal is to control the empire. With cunning and poison, the obstacles fall one by one. But as Agrippina’s machinations earn her son a title he is both tempted and terrified to assume, Nero’s determination to escape her thrall will shape him into the man he was fated to become, an Emperor who became legendary.

With impeccable research and captivating prose, The Confessions of Young Nero is the story of a boy’s ruthless ascension to the throne. Detailing his journey from innocent youth to infamous ruler, it is an epic tale of the lengths to which man will go in the ultimate quest for power and survival.

The first thing that drew me to this book was the fact that it was about Nero. He is Italian….need I say more. The second thing was the gorgeous cover. The crossed laurel wreath on the front as well as the Roman Forum in all its glory I found beautiful. I know very little about the emperors of Rome other than a few of their names. Fear not, I have already purchased a book about the history of SPQR and intend to read it and absorb every morsel of knowledge that it has.

This book is written almost in diary form. There are no days distinguished but the way it is written, to me, makes it feel like Nero is writing down all of his deepest thoughts to a secret friend. One that will not spill the beans so to speak. It is also formed from two other people’s thoughts, but they are few and far between. The book begins as Nero is a young boy living with his aunt outside of Rome. He is living with her because his father is dead and his mother, Agrippina, is in exile. He goes to live with his aunt because his uncle Caligula tormented him. Throwing him into a lake without him knowing how to swim. He made fun of him in front of people. It seemed he made it his goal in life to make Nero’s life a living hell. For a small boy, that leaves its mark and is something he never forgot. One day Nero hears that Caligula is dead and Claudius is now emperor. A woman comes and tells him that she is his mother, Agrippina. She is back from exile. She removes him from the only house he has ever known. Will Nero thrive in his new environment or will everything come crashing down around him?

This book was slow. But slow in a historical sense, not in a story sense. I loved everything that happened to him. Things that I could say “oh I remember learning about that in my history class”, “oh that ties in with this and this”, “oh I did not realize that about such and such.” Everything that happened made me want to turn the page to find out more. I will say that about halfway through I got on the struggle bus to finish. It had gotten slightly drier and was a lot more informative. I am actually kind of bummed that there isn’t another one already written for me to tear into. The author ended the story with Nero going back to Rome as it burned. It certainly was ended on a cliffhanger that makes you want to read to find out how he saved Rome or at least attempted to save Rome. All in all, this book is well researched and written in such a way that anyone could read it. The author paints a gorgeous picture of Ancient Rome that I could see in my mind’s eye.

You can now pick up your own copy of The Confessions of a Young Nero by Margaret George from Amazon or Barnes and Noble, or find it at your local bookstore. Also make sure to add it to your To Reads list on Goodreads and leave feedback for the author when you are finished. We also encourage you to check out Margaret George’s other books on her website HERE!

Stay-at-home mom to two children and one toddler. I love to read, travel (haven't done it in a while), and cook. Born and raised in Three Rivers, Michigan and currently, reside in Northern Michigan. Can't wait to start sharing my book thoughts/ reviews with you!!
Previous BOOK REVIEW: The Last Thing You Said by Sara Biren
Next BOOK REVIEW: Pretty Fierce by Kieran Scott