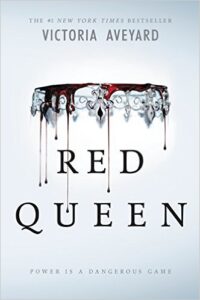 Graceling meets The Selection in debut novelist Victoria Aveyard’s sweeping tale of seventeen-year-old Mare, a common girl whose once-latent magical power draws her into the dangerous intrigue of the king’s palace. Will her power save her or condemn her?

Mare Barrow’s world is divided by blood—those with common, Red blood serve the Silver- blooded elite, who are gifted with superhuman abilities. Mare is a Red, scraping by as a thief in a poor, rural village, until a twist of fate throws her in front of the Silver court. Before the king, princes, and all the nobles, she discovers she has an ability of her own.

To cover up this impossibility, the king forces her to play the role of a lost Silver princess and betroths her to one of his own sons. As Mare is drawn further into the Silver world, she risks everything and uses her new position to help the Scarlet Guard—a growing Red rebellion—even as her heart tugs her in an impossible direction. One wrong move can lead to her death, but in the dangerous game she plays, the only certainty is betrayal.

I have seen a ton of hype about this book series the last few months. I hadn’t heard anything about these series until the started blowing up my Goodreads feed and PageHabit on Facebook. To my delight, the book was on sale for 2.99 sometime around Christmas. I decided to get it since, even if the book was awful, it was only three bucks. Spoiler: the 2.99 was well spent.

The story revolves around Mare (a Red), Maven (a Prince and a Silver) and Cal (also a Prince and a Silver). Reds do all the hard labor to produce the goods and services that people need to survive. Various Red villages provide different things. Some provide the electricity. Some provide the clothing. Reds bleed red if injured. The Silvers are the Royals and Higher House families. They have powers: telepathy, healing, fire, metal bending, etc. They also bleed silver if injured. Mare pick-pockets to help feed her family and keep them alive. She steals and sells the stuff or keeps it for her mother since her brothers have been conscripted, a requirement of most Red males or females at the age of 18, and her father is wheelchair bound while serving in the military. While pick-pocketing a bar outside of town she runs into Cal. She doesn’t know who he is, nor does he tell her. The next day she gets taken into the royal household to become a servant. She won’t be conscripted now. She thinks Cal got the job for her and looks for him. Mare is paired with the kitchen staff. She gets tossed into the deep end serving the High House families for the event the Royals have been waiting for. The choosing and showing of the future Queen. The Silver girls put their powers on display. It’s not until the Royal Family comes out that Mare realizes that Cal is the Prince and that is how he was able to get her the job in the castle. One thing leads to another and Mare somehow is able to gather the electricity from around her and produce lightning. Mare is terrified since she has no idea how it happened. She is a Red born and bred. She is worried that the Silvers will imprison her or worse. What will happen to Mare now? Will the Royal family keep her and use her to their advantage? Will she ever know why she was able to gather the energy around her and produce lightning?

Oh my goodness, this book. I will admit up front that it did take a few chapters, probably 5-6, for the book to really get rolling. Once it did, it did not stop. It made me want to immediately read the second book in the series. I loved the characters. They each had their own nitch in the book. The Prince who wanted desperately to be loved and showered with praise by his parents. The Prince who was showered with praise but wanted to do what was right. The servant girl who wasn’t royal at all but wants to help the Royals fix the problems between their two groups. I cheered when the two characters I liked the most kissed but eehhhhhh’d since she was engaged to the other brother at the time. I was left with my jaw hanging open when the surprise twist came at the end. It was something that I did not see coming even in the slightest. I have started the second book and am excited to see what it brings to the table.

Red Queen is available at your local bookstore, Amazon, and Barnes and Noble. Make sure to add it to your To Reads list on Goodreads and leave feedback for the author when you are finished. You can also check out the next two books in the Red Queen series, Glass Sword and King’s Cage, as well as two novella’s featured in Cruel Crown.

Stay-at-home mom to two children and one toddler. I love to read, travel (haven't done it in a while), and cook. Born and raised in Three Rivers, Michigan and currently, reside in Northern Michigan. Can't wait to start sharing my book thoughts/ reviews with you!!
Previous TV RECAP: Outlander, Season 3 – Episode 13 “Eye Of the Storm”
Next BOOK REVIEW: Watch Me by Jody Gehrman