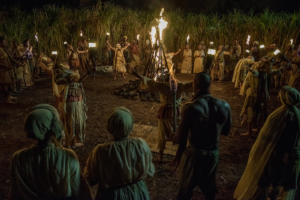 The episode opens as Claire is sinking into the water saying that she was dead. She has a rope of some sort wrapped around her. Her voluminous skirts are floating around her. We “don’t know” what has happened yet. Of course, if you have read the books you do.

Claire is in a carriage bouncing down a trail. The carriage comes to a stop. She wonders what is going on. She looks out the window and sees a line of slaves on both sides humming as they walk past with torches. She travels down the trail a little further. The carriage stops and she gets out and asks which way she goes. The driver points down the path and tells her the slave quarters are down that way. She goes down the path and whispers for Ian. She sees a dog sniffing around a pile or reeds. She shoos the dog away. She pulls them aside and finds bodies of teenage boys beneath. Fergus and Marasli now know that Claire is missing and checks her room. They see her dress from the party laying on her bed. They also find the letter that she wrote them. Claire gets caught by one of Geillis’s henchman that she calls Hercules. Hercules takes her up to Geillis. Shortly before Geillis sees Claire she is yelling at Ian for not mentioning his Auntie Claire and her involvement with the whole thing. Ian says that doesn’t know anything about it. Ian gets hauled off shortly before Claire gets brought in the other door. By the end of the conversation, they both know that each person is up to something but what that is they don’t know yet.

Jamie’s would be captors take him to see Lord John. Lord John basically rips them to shreds. He brings up the lack of any arrest warrants. Any proof that Jamie did what he is accused of. Lord John reprimands Capt Leonard and tells him to leave Jamie with him and he will take care of it. Lord John in return releases Jamie. Jamie once again is in his debt.

Geillis and Claire are talking. Claire is telling her story. Geillis really doesn’t believe her. (OK, seriously what is up with her forehead!?) She doubts that Claire was able to go through the stones 3 times all while pregnant with Jamie’s baby. And that she did it all without the blood sacrifice. She continues to doubt Claire until she breaks the photos of her daughter out, including the one that she is in as well. Geillis realizes she is telling the truth when she remembers that she has, in fact, meet Bree when she visited Scotland with her mother. Geillis soon realizes that Bree is the 200-year-old baby that Margaret Campbell talked about. She pockets one of Claire’s photos all sneaky like and hands the rest back to Claire. Geillis allows Claire to stay but locks her in. Through the window Claire sees Ian being hauled away. She tries to get out. Suddenly Jamie is there. Together they go and search for Ian in the direction he was hauled. They follow the sound of the drumming and stumble upon the slaves in some sort of ritual dance. They way they melded the Scottish druid dancing with the slave dances was amazing. I loved it!

Jamie and Claire get caught watching the slaves dancing. Mr. Willoughby appears and informs the people they are with him and they are good people. They seem surprised to see Mr. Willoughby. He tells them that he is there with Margaret Campbell. They have found happy companionship with each other. Margaret greets them both. Upon seeing them she has a vision and falls into her weird voice trance thing. Claire realizes at that moment the 200-year-old baby is Bree and that Geillis has taken the photo. Mr. Campbell shows up and a scuffle occurs. Mr. Willoughby ends up killing him. That is so NOT how all this happens in the book. I am still on the fence with how they did some of this. Claire and Jamie follow Geillis to the portal cave to stop her. She is making a design on the ground with Bree’s photo in the center. We see Ian tied up on the ground. She dumps gas on Ian to use him as the sacrifice to get through the portal which Claire realizes is the pool of water. While Jamie is fighting with her henchmen Claire deals with Geillis. They fight and Claire ends up taking off her head with a machete. That is the moment she realizes that the skeleton she examined in Boston really was Geillis which explains the weird feeling she had when she saw it. They free Ian and escape the island.

FINALLY!! We have been waiting 12 episodes for this kind of love scene to surface! About dang time… Anyway, the calm boat ride takes a turn for the worse when they get stuck in a horrible storm. Jamie is on deck struggling to control the boat. Claire is below demanding that everyone must stay below for their safety but goes topside since she is the still the ship’s surgeon and it is her duty to tend to the wounded. Jamie and the crew have a losing fight with the boat. He tells the men to go below and he goes back to get Claire. When they do, a massive wave appears and strikes the boat. Jamie manages to stay on board but Claire gets tossed over. We go back to the beginning of the episode and scene of her being dragged down by the rigging. Her skirts floating around her. Jamie swims down and rescues her. They wash up on shore. Jamie is awoken by a girl poking him with a stick. He crawls to Claire. She is still alive. They have no clue where they are. The girl’s parents come down to the beach to see if they are all right. They tell them that the rest of the ship is further up the beach. They are relieved, the rest of their family is safe. They ask them where they are. They are in Georgia! They got so off course with the storm they have made it to the American Colonies!!

Oh, this episode. Where do I begin? I loved it for the most part. However, having read the series twice now, there are things that are so different in the book. I understand creative license and that nothing will be exact but it was far off enough that it bugged me a little. Some things just feel a little flat. Things that were butt clenchingly exciting in the book were like “oh hey that just happened..ehhh carry on”. While other things that were ehhh in the book are butt clenchingly exciting in the show. I know that there is a lot to cover in the series. They crossed an ocean and had an adventure on either side. The colors in this season were super vibrant. The clothes, when they wore something other than their “boat attire”, was exquisite and gorgeous. It somewhat harkened us back to Paris. The changing of the opening song was amazing. The change from bagpipes and Scottish music to more tropical and island-themed was great. I hope that we find out soon if they have it renewed for a 5th and 6th season. Until then I will continue to plod along in my rereading of the series.

Super Mom and Awesomely Nerdy Lady who can’t stand to sit still. I ran a successful online radio show that brought fans up close and personal with their favorite music, television and movie stars. Now, with my hilariously nerdy partners in crime, I have turned to my first love, BOOKS! A lover of books from a young age, I now always have a book on me no matter where I go. Books are my therapy. Twitter: @Kristin_Downer
Previous BOOK REVIEW: Before I Let Go by Marieke Nijkamp
Next BOOK REVIEW: Red Queen by Victoria Aveyard