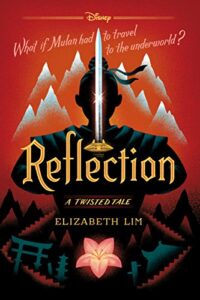 What if Mulan had to travel to the Underworld?
When Captain Shang is mortally wounded by Shan Yu in battle, Mulan must travel to the Underworld, Diyu, in order to save him from certain death. But King Yama, the ruler of Diyu, is not willing to give Shang up easily. With the help of Shang’s great lion guardian ShiShi, Mulan must traverse Diyu to find Shang’s spirit, face harrowing obstacles, and leave by sunrise–or become King Yama’s prisoner forever. Moreover, Mulan is still disguised as the soldier called Ping, wrestling with the decision to reveal her true identity to her closest friend. Will Mulan be able to save Shang before it’s too late? Will he ever be able to trust her again? Or will she lose him–and be lost in the Underworld–forever?

When I saw that this was a twisted tale, I had no idea what that meant. Turns out it is a twist on the Disney movie. A “what if” of sorts. I had to read it because A: I love the movie Mulan and B: the whole concept sounded absolutely awesome. To top it all off when I found out the “twist” was a series called Twisted Tales I promptly purchased two others and added the other ones to my wish list so I could price stalk them.

The story about Mulan opens up just as she is fighting the Huns on the winter mountain pass. Mulan/Ping steals the cannon from her fellow soldiers and fires it into the snow creating a avalanche, just like the movie, defeating the Huns. In the middle of all of this Shang, Mulan/Ping’s Captain, get injured. Mulan feels responsible for this and takes over the care of him. She is worried since he has a high fever and the sword wound in his abdomen is still bleeding. Mulan/Ping manages to save him from the avalanche and starts to walk him down the mountain over the back of her horse. She intends to take him back to the Imperial City for medical care. The way down is made perilous by the large quantity of snow that now covers the ground. Once Mulan/Ping makes it down to the camp her fellow soldiers have set up, she works to clean and dress the wound and attempt to get some nourishment into Shang. He is still unconscious. Mulan/Ping sets up to watch him all night. Despite trying to fight it, she falls deeply asleep. She is awoken by a booming voice. She goes outside and finds a large stone lion. He tells her that his name is ShiShi. He is the guardian for Shang’s family. He tells her that he has been sent by Shang’s deceased father to save Shang’s spirit from King Yama and Diyu and bring him back to the human world. And so Mulan/Ping goes on the adventure of her life. Will Mulan/Ping find Shang in Diyu? Will she be able to get him back in time to save he his spirit?

This book was awesome. I could totally see it being part of the movie. It was a little darker than the Disney movies normally are. The book was well written and you could tell that the author did her research into Chinese folklore and knew how the movie went. Everything flowed easily and she made reference to different things that happened in the movie. I loved the action. It kept me on the edge of my seat. There was a hint of romance at the very end of the story between Mulan and Shang like there was in the movie. I can’t wait to read the rest of the books in the Twisted Tale series. If they are well written as this book they will be so great!

Reflection by Elizabeth Lim is available on Amazon, Barnes and Noble, and a bookstore near you. Make sure to add it to your To Reads list on Goodreads and leave feedback for the author when you are finished. You can check out more from author Elizabeth Lim on her website here. You can also check out more from the Twisted Tales Series, although the other novels are not written by Lim. The other novels are available anywhere books are sold.

Stay-at-home mom to two children and one toddler. I love to read, travel (haven't done it in a while), and cook. Born and raised in Three Rivers, Michigan and currently, reside in Northern Michigan. Can't wait to start sharing my book thoughts/ reviews with you!!
Previous BOOK REVIEW: Baby Teeth by Zoje Stage
Next BOOK REVIEW: Lies, Love, and Breakfast at Tiffany’s by Julie Wright