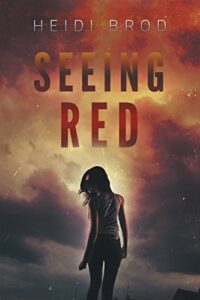 The birth of her child, Sky, is a trigger for Seraphine Swift-Whitlock as she is once again haunted by nightmares and flashbacks from the night she was attacked. She thought she was alone, but someone had followed her home. She could still hear his whisper cut through the darkness of the night before the ground rose up and her head hit the pavement and everything faded to black.

She thought that when she married Harper Swift, she would escape her troubled past; but instead, she is haunted by a deadly secret that won’t stay buried and a jigsaw puzzle of feelings and images that threatens to tear her world apart.

When a college student is murdered and the gruesome crime scene parallels what happened that night on the streets of Boston, it’s Harper that’s put on the case.

As more bodies surface, Seraphine is thrown back into a labyrinth of darkness, once again fighting for her life. Frightened and desperate, she has to get stronger and learn to fight if she’s going to be able to save her beautiful baby girl, Sky, and the only man she’s ever loved.

The characters are all intertwined and pawns in a game as Seraphine tries desperately to unravel the mystery behind the murders before the killer is back to finish what he started.

Seeing Red by Heidi Brod has the promise of a gripping, spine tingling suspense and a catchy cover to boot.

The story follows Seraphina as she deals with a past trauma, raising a daughter, and a philandering husband. The trauma has her questioning her own sanity, and I think Brod wanted the reader to question her sanity as well as automatically assume the issue was not her sanity, because that would be too easy. Brod keeps you on your toes guessing who the protagonist is and which characters are guilty, not guilty, or just plain crazy.

While the story had it’s intrigue and suspense, it was a bit choppy. I felt the characters were acting in contradiction to themselves almost immediately after they did something or said something. They would do the complete opposite, and have a complete 180 of thoughts to the point it made me stop and question if I had read it wrong. It was not smooth at all. While I enjoyed the story, I felt this took away from the overall enjoyment because it took time away to try and mentally catch up with the jumping around. While this did not ruin the story, I feel like it had a significant impact on the story, therefore bringing my rating of it down.

Even with the choppiness, this story held a lot of really good content, including suspense, drama, mystery, and a little love mixed in. Those who enjoy a good suspense novel that keeps you guessing could enjoy Seeing Red. Pick it up and let me know what you think.

You can get your copy of Seeing Red by Heidi Brod on Amazon or Barnes and Noble. Also make sure to add it to your To Reads list on Goodreads and leave your feedback for the author when you are finished.

Super Mom and Awesomely Nerdy Lady who can’t stand to sit still. I ran a successful online radio show that brought fans up close and personal with their favorite music, television and movie stars. Now, with my hilariously nerdy partners in crime, I have turned to my first love, BOOKS! A lover of books from a young age, I now always have a book on me no matter where I go. Books are my therapy. Twitter: @Kristin_Downer
Previous BOOK REVIEW: Wild Hearts by Lindsay Detwiler and Claire Smith
Next BOOK REVIEW: The Family Next Door by Sally Hepworth