The Bigtree alligator wrestling dynasty is in decline–think Buddenbrooks set in the Florida Everglades–and Swamplandia!, their island home and gator-wrestling theme park, is swiftly being encroached upon by a sophisticated competitor known as the “World of Darkness.”

Ava, a resourceful but terrified twelve-year-old, must manage seventy gators and the vast, inscrutable landscape of her own grief. Her mother, Swamplandia!’s legendary headliner, has just died; her sister is having an affair with a ghost called the Dredgeman; her brother has secretly defected to the World of Darkness in a last-ditch effort to keep their sinking family afloat; and her father, Chief Bigtree, is AWOL. To save her family, Ava must journey on her own to a perilous part of the swamp called the “Underworld,” a harrowing odyssey from which she emerges a true heroine.

I had never heard of this book before getting it assigned to me for my club book.  While the star rating wasn’t exactly high, I viewed that with a grain of salt because not everyone has the same book tastes.  I was also looking forward to reading about alligator wrestling.

Ava Bigtree can’t wait to wrestle alligators, like her father, or swim with them, like her mother, at their alligator farm/tourist trap/family home.   They call their pride and joy Swamplandia!  They do multiple shows a day.  While Ava, at the tender age of 13, is still too young in her parent’s eyes to do everything that they do.  Instead, her parents make her and her siblings, Kiwi and Osceola, run the tours in the museum and do the concession stand.  In a horrible turn of events, their Mother (and star attraction) dies of cancer thrusting the whole family into disarray.  They begin to lose visitors and are eventually forced to shut down.  Osceola starts talking to ghosts and practicing voodoo.  Kiwi leaves in the middle of the night to go to the mainland taking 300 dollars from his dad’s wallet.  Ava’s father eventually goes to the mainland and tells Ava he will be back in 3-4 months.  Ava is left alone with Osceola, who is acting weirder and weirder.  She tells Ava she is dating a ghost who died in the 1930’s.  Osceola tells Ava she is leaving for the underworld to marry her boyfriend.  Ava is left by herself.  One day, while exploring the island, she runs into the Bird Man,  He clears the unwanted birds from the island.  He offers to take her to the underworld to rescue her sister.  On the mainland, Kiwi is working at a rival alligator park trying to save up enough money to help his dad save Swamplandia!  Will Ava be able to save her sister before it is too late?  Will Kiwi make enough money to help save Swamplandia! from foreclosure?

I finished this book, put it down and said: “WTF did I just read?”  I did not like this book.  I found it rather boring.  It was very this happened then this happened and then she did this.  It felt very flat and lacked depth.  While the idea behind the storyline was interesting, it just wasn’t delivered well.  I know the whole point of a book club is to read books that are normally not in your wheel-well.  However, after reading this book I want to smack the person from our book club who selected it with a wet noodle.  I felt like I had to drag myself through the book.  It took me twice as long to read as normal and I stopped reading it for several weeks before forcing myself back to finish it.

Stay-at-home mom to two children and one toddler. I love to read, travel (haven't done it in a while), and cook. Born and raised in Three Rivers, Michigan and currently, reside in Northern Michigan. Can't wait to start sharing my book thoughts/ reviews with you!!
Previous BOOK REVIEW: An Irish Flirtation: Emerald Isle Enchantment by Louisa Masters
Next EXCLUSIVE INTERVIEW: Pop Funk Duo KiSMit Talks new music

BOOK REVIEW: Confessions on the 7:45 by Lisa Unger 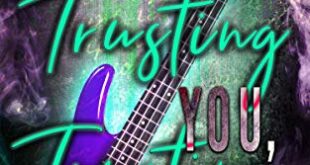 BOOK REVIEW: Trusting You, Trusting Me by Tylor Paige