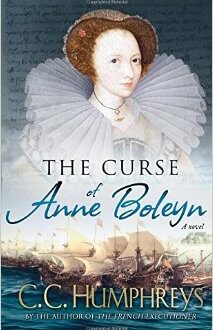 BOOK REVIEW: “The Curse of Anne Boleyn” by C.C. Humphreys

SYNOPSIS: (From Goodreads)
Years have gone by since the events surrounding the death of Anne Boleyn. But her missing hand and all that it represents to the dark world of 16th-century Europe still draws the powerful to seek it out. Jean Rombaud – the French executioner of the first novel – has grown old, both in age and spirit. Wearied by the betrayal of a son and the scorn of a wife, he fights in the seemingly never-ending siege of Siena. Meanwhile, Gianni Rombaud has forsaken everything his ageing father stands for and now kills heathen for the Inquisition in Rome. Then he is summoned by Cardinal Carafa himself. His masters no longer merely want his dagger in the hearts of Jews, they want the hand of the dead queen… But only three people know where it is buried, and one of them is Gianni’s father…

REVIEW:
While I am more of a murder/mystery in current times fan, this book caught my attention when I was asked to review it. I have a friend who loves Anne Boleyn and bragged about my chance to read a book centering around her favorite historical being. C.C. Humphreys, the author of “The Curse of Anne Boleyn” has had many successful books and is well liked among readers, especially in historical fiction.

The writing in ‘The Curse of Anne Boleyn’ is impressive. Dialogue is well matched for the time frame in which the book takes place and the characters are well described and fit the bill too. While I liked the plot, I felt at times it was slow and made wanting to continue hard. With that being said, it did have it’s peak moments of excitement and intensity that made you want to keep turning the page.

I believe fans of C.C. Humphreys will enjoy this book and be eager to read more. It is well written and Humphreys definitely did the research. Good job!

C.C. Hymphreys’ ‘The Curse of Ann Boleyn’ comes out May 1st! Make sure to add it on your Goodreads TO READ list and pick it up on Amazon when it’s out.

Super Mom and Awesomely Nerdy Lady who can’t stand to sit still. I ran a successful online radio show that brought fans up close and personal with their favorite music, television and movie stars. Now, with my hilariously nerdy partners in crime, I have turned to my first love, BOOKS! A lover of books from a young age, I now always have a book on me no matter where I go. Books are my therapy. Twitter: @Kristin_Downer
Previous BOOK REVIEW: “Whisper” by Stacy R. Campbell
Next BOOK REVIEW: ‘Lois Lane: Fallout ‘ by Gwenda Bond