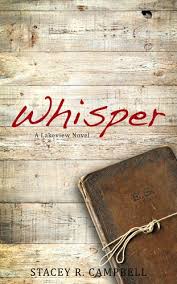 On a snowy January night, just days after a fire that nearly destroyed the school’s library, Elsie Stewart, daughter of the headmaster and founder of Lakeview Academy, dies slipping beneath the ice of frozen Clearwater Lake. Unable to right the wrongs she committed before her tragic death, Elsie’s spirit walks the halls of her father’s school, waiting for someone who can.

One hundred years later, while joining her sister’s friend Leigh to help clean out the school’s administration building before the big remodel, Halle stumbles upon Elsie’s hidden journal.
Obsessed with what she finds, Halle searches the school for clues that may lead to solving a century-old mystery. The only problem is that Halle also talks Calum Stewart, Leigh’s worst nightmare, into helping them.

Once Leigh and Calum are forced work together, sparks fly and no one around them, alive or dead, is left unaffected.

REVIEW:
I have previously done a review of ‘Hush’, the first book in the Lakeview Series by Stacey R. Campbell. The book was good, well written, and interesting. ‘Whisper’ is not much different, except it has a more supernatural twist to the tale.

While the synopsis says it follows Halle Henry, sister of Blakely (from ‘Hush’) in her first year at Lakeview, I felt the book followed Leigh more. Leigh was a friend of Blakely and “big sister” to Halle while she was at school without her family. You see far more into what is happening with Leigh than Halle, but Halle does have some shining moment.

The supernatural twist on this story gave a new outlook to Lakeview that I didn’t get to see in ‘Hush’. It made the school more creepy and adventurous as the group of students spend their year balancing love, schoolwork, sports, and the search for a missing crest guided by the help of a little ghostly friend. I loved the love story entertwined inside and growing up you see the characters go through over the course of one school year.

As per usual, Campbell created characters who were lovable and fun to read about. If I was to attend a boarding school, Lakeview is exactly the type of school I would love to attend. Campbell writes in a way that is friendly to young adults and also to older adults, appealing to a wider variety than the standard young adult reader. Even the supernatural aspects were written in a way that was believable and not cheesy, as some are these days.

Another good read by Campbell. I’m definitely looking to reading my early copy of ‘Scream’ and letting you all know what to expect when it releases in July! Four out of five stars.

If you haven’t read the first book in the Lakeview Series, ‘Hush’, make sure to pick it up for only $3.99 on Kindle. Make sure you swing over and get a copy of ‘Whisper’ from Amazon as well and you will be all prepared for the release of ‘Scream’, the next book in the Lakeview Series out July 20th. And swing over to her website for constant updates on what she is up to!

Super Mom and Awesomely Nerdy Lady who can’t stand to sit still. I ran a successful online radio show that brought fans up close and personal with their favorite music, television and movie stars. Now, with my hilariously nerdy partners in crime, I have turned to my first love, BOOKS! A lover of books from a young age, I now always have a book on me no matter where I go. Books are my therapy. Twitter: @Kristin_Downer
Previous BOOK REVIEW: “Imaginary Things” by Andrea Lochen
Next BOOK REVIEW: “The Curse of Anne Boleyn” by C.C. Humphreys