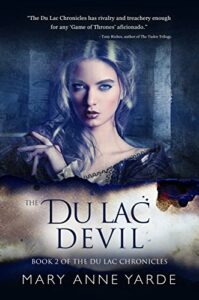 War is coming to Saxon Briton.

As one kingdom after another falls to the savage might of the High King, Cerdic of Wessex, only one family dares to stand up to him — The Du Lacs.

Budic and Alden Du Lac are barely speaking to each other, and Merton is a mercenary, fighting for the highest bidder. If Wessex hears of the brothers’ discord, then all is lost.

Fate brings Merton du Lac back to the ancestral lands of his forefathers, and he finds his country on the brink of civil war. But there is worse to come, for his father’s old enemy has infiltrated the court of Benwick. Now, more than ever, the Du Lac must come together to save the kingdom and themselves.

Can old rivalries and resentments be overcome in time to stop a war?

When approached by the author to read the next installment of the Du Lac Chronicles, I squealed with delight and answered with a hearty, YES! I couldn’t wait to start the next book! This book, however, doesn’t follow the story of Alden and Annis. It is the story of Merton. Merton is a lot more rogue than Alden. Remember Merton in the first book? He was Alden’s brother who acted like a drunk lunatic in court. People really didn’t filter what they talked about around him because they figured he really wasn’t in the right mind to remember or hear what they were saying.

The book opens with Merton and Alden building the castle so that they have something to live in for the winter. The General James comes and gets Merton to take care of a situation amongst the troops. A soldier is using the slaves that they plan on selling for profit as “target practice” so to speak. Merton comes upon the slaves fighting soldiers to the death. Through breaking up the fighting he meets Yrre. Yrre eventually becomes a mercenary who fights with him. The story then flashes forward 5 years. Merton, Yrre and the rest of Merton’s men are trapped between two armies. They make a plan. Well, Merton does. They steal uniforms from one of the armies and sneak into his brother’s (Budic) kingdom. Once they arrive, Merton discovers that his sister-in-law Anna and her new baby have died of fever and are being buried the next day. While visiting his brother, Merton discovers that he has feelings for his dead brother’s (Garren) wife Amandine. He loves her deeply. More than anyone he has ever had feelings for. He doesn’t care that she has an old drunkard for a husband. He is willing to kill him and whisk her away. Suddenly, they all find themselves in the middle of a rebellion to usurp Budic as the king. Will they succeed in their actions to cull the rebellion?

I loved the second book in the series. It had all the feels. Love, romance, suspense, rebellion, and sadness. The author does an amazing job of making the characters come alive. She deepens Merton’s character and makes him more human. She makes him both a monster, him locking in the villagers into a barn and lighting it on fire, and a hero, showing how caring he is by risking his own life to come back to save his love, Amandine. I don’t think I can wait until the next book comes out. The story was left on a huge cliffhanging bombshell that I didn’t even see coming.

You can get your own copy of The Du Lac Devil (Book 2) on Amazon or Barnes and Noble. Also add it to your To Reads list on Goodreads and make sure to leave feedback for the author when you are done!

Stay-at-home mom to two children and one toddler. I love to read, travel (haven't done it in a while), and cook. Born and raised in Three Rivers, Michigan and currently, reside in Northern Michigan. Can't wait to start sharing my book thoughts/ reviews with you!!
Previous BOOK REVIEW: Right Behind You by Lisa Gardner
Next BOOK REVIEW: The Hundred Lies of Lizzie Lovett by Chelsea Sedoti