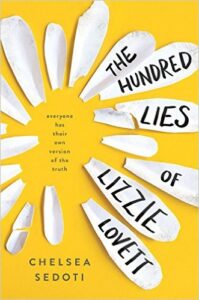 A teenage misfit named Hawthorn Creely inserts herself in the investigation of missing person Lizzie Lovett, who disappeared mysteriously while camping with her boyfriend. Hawthorn doesn’t mean to interfere, but she has a pretty crazy theory about what happened to Lizzie. In order to prove it, she decides to immerse herself in Lizzie’s life. That includes taking her job… and her boyfriend. It’s a huge risk — but it’s just what Hawthorn needs to find her own place in the world.

Chelsea Sedoti has taken a subject that is hard for some to read and turned it into an intriquing, nerve-wracking, story intertwined with lessons on love, growing up, and over imagination. The Hundred Lies of Lizzie Lovett follows the story of Hawthorn Creely as she finds herself, and by find I mean inserts herself, into a missing persons investigation for a girl she has loathed since freshman year. While she ends up being involves in multiple aspects of the missing persons life, Hawthorn begins to learn some valuable life lessons. High school friends are not necessarily forever. Friendships change. Romantic feelings can change quickly. People are not always who we think they are. And most importantly, no matter how hard you try to delay it you will always grow up.

Sedoti wrote some compelling characters who are all multiple layers of messed up for different reasons. While I found her main character, Hawthorn, a tad bit annoying and obsessive at times I was always hoping she would get it together in the end. Without giving too much away I can say there were aspects of the characters I could have dealt with less of and sometimes it felt forced or as if the author was filling space. There were also instances where I was really into a scene and then it was over and I wanted more. Not necessarily a bad thing. While there were little things that irked me throughout the book Sedoti did the one thing that authors should do. She got me wanting to know more and made me feel emotions for different parts of the book. There were times I was incredibly uncomfortable because of whatever given situation Hawthorn had gotten herself in. I was stressed at times. I found myself sighing and smacking my forehead when she made uneducated decisions that were obviously going to go badly and feeling the butterflies she felt when she was excited. It’s not easy to bring out strong emotions in readers so I give Sedoti major props for drawing such reactions from me.

The Hundred Lies of Lizzie Lovett is for anyone who wants a book that will draw you in and keep you from the beginning. Chelsea Sedoti is sure to drag an emotion out of you, even if you ended up disliking the main character most of the way through like I did. Her writing style is smooth and transitions well from one point to the next without any huge gaps or lost details. Due to my qualms with some of the “filler feeling” moments I cannot give this book a five stars, but it has a very strong four stars out of five. I’ll be checking out Sedoti’s next book to see what crazy characters and story lines she can throw at us next.

The Hundred Lies of Lizzie Lovett is available January 3rd. Pick up your copy from Amazon or Barnes and Noble. It will also be available in a bookstore near you. We highly encourage you to add the book to your To Reads list on Goodreads and leave your feedback for the author when you finished reading. Make sure to stay on the lookout for more books from Chelsea Sedoti in the future.

Super Mom and Awesomely Nerdy Lady who can’t stand to sit still. I ran a successful online radio show that brought fans up close and personal with their favorite music, television and movie stars. Now, with my hilariously nerdy partners in crime, I have turned to my first love, BOOKS! A lover of books from a young age, I now always have a book on me no matter where I go. Books are my therapy. Twitter: @Kristin_Downer
Previous BOOK REVIEW: The Du Lac Devil (The Du Lac Chronicles #2) by Mary Anne Yarde
Next BOOK REVIEW: One Moment by Kristina McBride