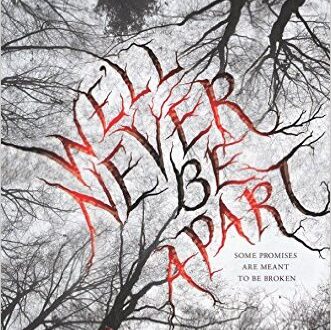 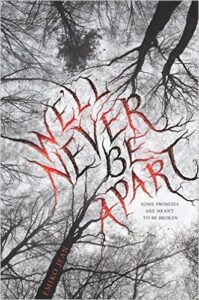 That’s all seventeen-year-old Alice Monroe thinks about. Committed to a mental ward at Savage Isle, Alice is haunted by memories of the fire that killed her boyfriend, Jason. A blaze her twin sister Cellie set. But when Chase, a mysterious, charismatic patient, agrees to help her seek vengeance, Alice begins to rethink everything. Writing out the story of her troubled past in a journal, she must confront hidden truths.

Is the one person she trusts only telling her half the story? Nothing is as it seems in this edge-of-your-seat psychological thriller from the debut author Emiko Jean.

REVIEW:
**A copy of this book was provided by the publisher through Netgalley in exchange for an honest review.**

Psychological thrillers are absolutely my thing. I love the suspense that leads up to the climax of the book and trying to figure out what is happening the whole way through. Emiko Jean’s debut book “We’ll Never Be Apart” had all those aspects. We got the crazy, the happy, and the heartbreaking all jam packed into one book.

“We’ll Never Be Apart” follows the story of Alice. A young girl who constantly finds herself recovering from the bad decisions of her twin Cellie. Being made orphans at a young age, Alice and Cellie grow up jumping from one foster family to the next. The only source of light along the way is Jason, who ends up dying from a fire set by Alice’s sister Cellie. Now finding herself locked in a mental hospital, she fights the inner battle of wanting revenge on her sister and wanting to move on with life. In comes Chase, boy wonder with problems of his own who instantly connects to Alice. He helps her try and break into the part of the hospital holding her sister, but fails. As time continues and her need to get revenge itches at her while she balances happy moments with paralyzing sadness, Alice comes to some unsettling realities and a shocking conclusion.

Jean tells a gripping tale of coping, terror, and one truly rough life. Alice learned to cope with her rough life in an abnormal way that most would call crazy. The story jumped between Alice now and Alice telling stories in her diary from her time growing up. The one thing I was personally not thrilled with was the fact that I figured out what was going on just over halfway through the book. I’d have liked to be a bit more surprised at the end, but even once I figured it out I wanted to know how it was going to play out in the end. Jean kept me interested and intrigued. I loved the twisted love stories weaved into the story and the moments of realization the characters had throughout. Even the heartbreaking breakdowns Alice goes through while in treatment. A well written, twisted, emotional and developed story everyone could enjoy. While it may be YA fiction I feel adults would enjoy this story too. Jean is well on her way to making a name for herself as a psychological thrill writer. Four out of five stars well deserved.

Pick up your copy now of “We’ll Never Be Apart” by Emiko Jean on Amazon or Barnes and Noble. Add it to your To Reads list on Goodreads. Follow Emiko Jean on her site or on Twitter now! You will not be disappointed.

Super Mom and Awesomely Nerdy Lady who can’t stand to sit still. I ran a successful online radio show that brought fans up close and personal with their favorite music, television and movie stars. Now, with my hilariously nerdy partners in crime, I have turned to my first love, BOOKS! A lover of books from a young age, I now always have a book on me no matter where I go. Books are my therapy. Twitter: @Kristin_Downer
Previous BOOK REVIEW/BLOG TOUR: “The Poet’s Secret” by Kenneth Zak
Next BOOK REVIEW: “Zeroes” by Scott Westerfeld, Margo Lanagan, and Deborah Bancotti