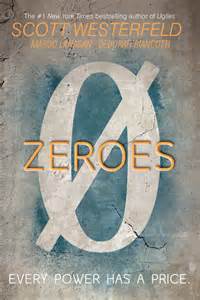 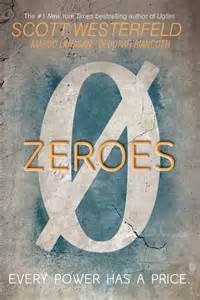 But these six Californian teens have powers that set them apart.

Take Ethan, a.k.a. Scam. He’s got a voice inside him that’ll say whatever you want to hear, whether it’s true or not. Which is handy, except when it isn’t—like when the voice starts gabbing in the middle of a bank robbery. The only people who can help are the other Zeroes, who aren’t exactly best friends these days.

Enter Nate, a.k.a. Bellwether, the group’s “glorious leader.” After Scam’s SOS, he pulls the scattered Zeroes back together. But when the rescue blows up in their faces, the Zeroes find themselves propelled into whirlwind encounters with ever more dangerous criminals. At the heart of the chaos they find Kelsie, who can take a crowd in the palm of her hand and tame it or let it loose as she pleases.

Filled with high-stakes action and drama, Zeroes unites three powerhouse authors for the opening installment of a thrilling new series.

Zeroes or heroes? A group of teenager to young adults using special powers to try and save people and things, but destroying some things in the process? Are they heroes because of who they save or are they zeroes because of the chaos that ensues? Just being able to review a Scott Westerfeld book is amazing. He didn’t get the title of New York Times bestselling author for no reason. Westerfeld teamed up with Margo Lanagan and Deborah Biancotti to bring us Zeroes, the story of a group of super power charged humans who try to do right but might mess up a little.

To be honest, I was not caught right away. The story started by centering around Ethan, also known as Scam, as he tries to use his inner voice to catch a ride home. The voice is a bit creepy as it says whatever it wants and sometimes that is not a good thing. He winds up in trouble and calls on the other Zeroes… who no longer speak to him… to bail him out. From tech crasher, crowd controller, and all seeing blind girl, and anonymous man, each has to use their abilities to drag Scam out of dirt even if they don’t want. Of course chaos follows, bad things get worse, and these kids find themselves in way over their head.

While it seems like destruction should be the ultimate ending of this book, Westerfeld, Lanagan, and Biancotti created a story about forgiveness, friendship, trust, and coming together. Even the most “different” have someone like them to bond with. Action packed and great character development is what kept me interested in this book. Westerfeld kept growing the characters and letting us learn just a little more about them with each chapter. The one thing I disliked about this book was I felt it could be shorter. Some of the chapters were repetitive in nature or drawn out for no reason. Maybe I just wanted to be back to the action or maybe it could have been a few chapters shorter, but it was the one catch in my eyes. However, long drawn out chapters led to a great climax leaving me biting my nails. I couldn’t complain too much after that.

If you are looking for a read similar to that of the show Heroes, then pick up this book. It’s full of adventure and will keep you entertained for hours. Westerfeld, Lanagan, and Biancotti deserve this four star review. Very minor adjustments could have gotten a five but they weren’t that far. If I could give 4.5 stars I would! A good time for boys and girls and people of all ages.

Pick up your copy of Zeroes on Amazon or Barnes and Noble. Add it to your To Reads list on Goodreads. Check out other works by Scott Westerfeld on his website and also look up Lanagan and Biancotti!

Super Mom and Awesomely Nerdy Lady who can’t stand to sit still. I ran a successful online radio show that brought fans up close and personal with their favorite music, television and movie stars. Now, with my hilariously nerdy partners in crime, I have turned to my first love, BOOKS! A lover of books from a young age, I now always have a book on me no matter where I go. Books are my therapy. Twitter: @Kristin_Downer
Previous BOOK REVIEW: “We’ll Never Be Apart” by Emiko Jean
Next BLOG TOUR/BOOK REVIEW: “Everything She Forgot” by Lisa Ballantyne