BOOK REVIEW: Wherever There Is Light by Peter Golden 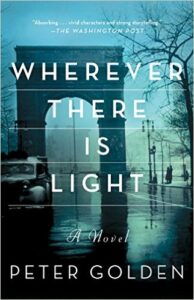 From the author of Comeback Love­, a sweeping, panoramic tale of twentieth-century America, chronicling the decades-long love affair between a Jewish immigrant and the granddaughter of a slave.

Julian Rose is only fifteen when he leaves his family and Germany for a new life in 1920s America. Lonely at first, he eventually finds his way—first by joining up with Longy Zwillman and becoming one of the preeminent bootleggers on the East Coast, and later by amassing a fortune in real estate.

Kendall Wakefield is a free-spirited college senior who longs to become a painter. Her mother, the daughter of a slave and founder of an African-American college in South Florida, is determined to find a suitable match for her only daughter.

One evening in 1938, Mrs. Wakefield hosts a dinner that reunites Julian with his parents—who have been rescued from Hitler’s Germany by the college—and brings him together with Kendall for the first time. From that encounter begins a thirty-year affair that will take the lovers from the beaches of Miami to the jazz clubs of Greenwich Village to postwar life in Paris, where they will mingle with Sartre, Picasso, and a host of other artists and intellectuals. Through his years serving in American intelligence and as an interrogator at the Nuremberg trials, what Julian wants most is to marry and find the joy that eluded his parents. Kendall craves her freedom, and after trading her oil paints for a Leica camera, becomes a celebrated photographer, among the first American journalists to photograph the survivors of a liberated concentration camp. Yet despite distance, their competing desires, and the rapidly changing world, their longing for each other remains a constant in the ceaseless sweep of time.

Captivating and infused with historical detail, this is the epic tale of three generations, two different but intertwined families, and one unforgettable love story.

Wherever There Is Light by Peter Golden is a gorgeously written and haunting love story that stretches from the 1930’s through the 1960’s. Julian Rose is a ex-bootlegger/reformed land developer with Jewish roots who falls for Kendall Wakefield, an educated black woman with a chip on her shoulder and dreams bigger than her eyes. They embark on a torrid love affair that defies the times they live in and the fallible truths they’ve held to all their lives. Both want something the other can’t give and it leads them on a journey neither of them anticipate.

Golden gives small snippets of just after Prohibition and takes you through racism in the South, indifference in the North, and the ever-growing turmoil of World War Two. Much of the story focuses solely on Julian and Kendall who fall in and out of each other’s lives and when both end up in Paris, the secrets between them may be too much to bind them back together. As someone who loves history and especially that which surrounds World War Two, I loved seeing these small glimpses into the past. I wish I could have seen more, but truthfully, it would have detracted from the story.

Wherever There Is Light kept me up for nearly two days straight. I couldn’t put the book down and when I did, I daydreamed about the moment I could pick it back up. I’m easily captivated by a good story, but Wherever There Is Light didn’t just captivate me: it consumed me. That’s why I was caught off-guard by the ending. It felt abrupt and sharp–as if something crucial was being ripped away. It felt as if the author wasn’t sure how to end the story so he took the most obvious route. The ending fell flat and was disappointing. The end did nothing for the original story. A different ending would have tied things together and would not have demoted the story from a high class meal to a $1 burger from the drive-thru.

As much as it pains me, I have to give Wherever The Light Is by Peter Golden 3 out of 5 stars.

Tags Author Book Novel Peter Golden Wherever There Is Light