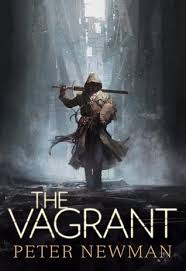 By: Peter Newman
Peter Newman is the author of The Vagrant, on sale now from HarperCollins. The Malice, its highly anticipated sequel, is forthcoming in Winter 2017.

You see a lot of hooded men (and less commonly, women) on book covers these days. I suspect it’s because they look extremely cool and, dare I say it, bad-ass?

Yet, I also see people rolling their eyes. ‘Oh, not another hooded man with a sword,’ they say. I don’t think this is due to a problem with the imagery itself (see above) but rather with the stereotype some people associate with it; namely a tough character that speaks like a bad Batman wannabe and brings death in their wake, that never apologises, and never uses words of more than one syllable if they can help it. The kind of character that is moody, dark, and dangerous to know, that kills first and asks questions later. The kind of character that has no actual ‘character’, beyond the fact that they are really good at killing things.

But, for me, the hooded protagonist is one of the more interesting and there are many examples that are far more than just a killing machine. Many of these characters are complex and epitomised by struggle, either to fit into the world that doesn’t want them, or with their own natures.

We have the hero that is forced to hide from a society that has become corrupt (the most famous example being Robin Hood). The hero that is wrestling to balance his humanity with his own dark desires, (Raistlin from Weis and Hickman’s Dragonlance books, who is anchored by his love of friends and family, however much he tries to hide it). The hero that is fuelled by tragedy, doing good despite or because of it (Batman!). And then there are more controversial characters that wear darkness proudly on their sleeves (like Jorg Ancrath from Mark Lawrence’s Broken Empire series).

Probably one of fantasy’s earliest hooded man examples is Strider from Tolkien’s Lord of the Rings. Someone that hides both from the forces of Sauron and his own true nature whilst managing to remain heroic. Of course, by the end of the books he’s not hiding from either, and that journey is one of the things that makes him so compelling.

It would be wrong to talk about hooded characters and not mention Death. While it would be easy to discard the Grim Reaper, Sir Terry Pratchett made him funny and lovable, a character that both fits the stereotype and plays with it beautifully.

You may have noticed that The Vagrant features a man on the front with a hood, and that he’s carrying a large sword. But look closer and you’ll see he’s also carrying a baby. He does have a hood but, as in the previous examples, it’s the person underneath that is the important bit. As to what he’s hiding from or what he’s struggling against, you’ll have to read the book to find out!

When I was writing this post I kept remembering more and more cool hooded characters, too many to fit in here. Special mentions to the following though*, and feel free to add ones I’ve missed, and why they’re so cool, in the comments.