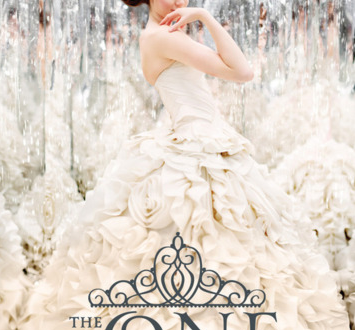 Book Review: “The One” by Kiera Cass

Kiera Cass has struck again. If you have read the first two books in this incredible series, then you know how hard it was waiting for this final installment to come out. Cass’ Selection series follows the story of America Singer in a dystopian future where the royalty of Illea is married off to a commoner. It doesn’t matter their number, whether a 2 (wealthy and mingled with the higher ups) or a 5-8 (basically poor or homeless), the women can enter in to be married off when one of the royal family comes of age. This time around? Prince Maxon. The first two books in the series, The Selection and The Elite, have followed as America Singer was slowly narrowed down in a group of 30+ women from all walks of life down to 6. In The One, we watch as America tries to make her final decision between Prince Maxon and her childhood love, Aspen. But when she makes a decision could it be too late, or maybe even too soon.

Without giving too much away in regards to the outcome of this book (Why have you not read it yet?), I will say this book has an ending you weren’t quite expecting. I was shocked at least. The storytelling Cass does is incredibly relateable and has you yearning for more information, more romance, more action. Constantly craving more! And Cass delivers. You will not be bored in this final installment and when it’s over you will hope for another novella to go along with “The Queen” and “The Prince” so you can find out more about what happens after the story ends.

Cass has a way of drawing the readers in and making them feel a part of the story. Great writing, an ingenious idea for a story unlike any other you have read, and fantastic characterization. A definite must read to be added to anyone’s list! Pick it up today online for e-readers or in a store near you!

Super Mom and Awesomely Nerdy Lady who can’t stand to sit still. Delving into the online world I ran a successful online radio channel and blog that brought fans up close and personal with their favourite music, television and movie stars. Now, with my hilariously nerdy partners in crime, we are hiding our nerdyness no more! Twitter: @Kristin_Downer
Previous BOOK REVIEW: “Terminal City” by Linda Fairstein
Next Book Charts: NY Times Best Sellers – June 1, 2014