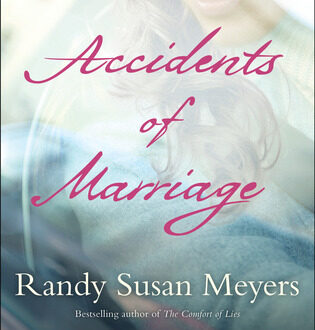 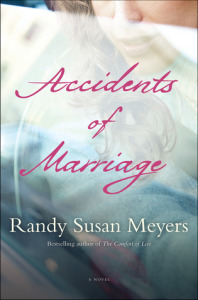 SYNOPSIS
Accidents of Marriage explores a topic rarely shown in fiction: the destruction left in the wake of spouse’s verbal fury. Ben never meant to hurt Maddy. He never imagined his recklessness would lead to tragedy.

Maddy is a social worker trying to balance her career and three children. Years ago, she fell in love with Ben, a public defender, drawn to his fiery passion, but now he’s lashing out at her during his periodic verbal furies. She vacillates between tiptoeing around him and asserting herself for the sake of their kids – which works to keep a fragile peace – until the rainy day when they’re together in the car and Ben’s volatile temper gets the best of him, leaving Maddy in the hospital fighting for her life.

Randy Susan Meyers takes us inside the hearts and minds of her characters, alternating among the perspectives of Maddy, Ben, and their fourteen-year-old daughter. Accidents of Marriage is a provocative and stunning novel that will resonate deeply with women from all walks of life, ultimately revealing the challenges of family, faith, and forgiveness.

ACCIDENTS OF MARRIAGE explores a topic rarely shown in fiction: the damaging effects of a spouse’s emotional abuse

Randy Susan Meyers did something that I find difficult to find in any book. She took a family and made them realistic. While most books have some sort of family element, ‘Accidents of Marriage’ is a perfect example of the mistakes that can be made in a family, from the kids to the adults.

This book follows the story of Maddy, a mother of two working as a therapist with a husband who works as a district attorney. If those two jobs aren’t demanding enough, problems at home are causing high tension and lots of fighting and one of the kids is beginning to act out. In the midst of all the chaos, Maddy’s husband, Ben, has an anger issue. He tends to get incredibly frustrated with Maddy and her “nagging” until one day it leads to a catastrophic accident. An accident that possibly could have been avoided. Now Maddy finds herself unable to handle her basic everyday needs and a husband that is far more doting that he was previously.

Meyers catches the emotions and actions of a desperate women trying to save her marriage and stand up for herself all at the same time. Multiple points-of-view are displayed as you see the story from the views of Emma (the daughter), Maddy, and Ben. A coming of age story from the perspective of the teenage daughter who is handling boys, rules, and childlike feelings creeping in to her hard demeanor. A story of a struggling couple with plenty of mistakes on each side. And the family members that are caught in between.

Meyers did an impeccable job of breaking down these characters, making you feel angry, sad, and happy all at the same time. There were moments of devastation where it was almost as if your family was going through it and then wrapped up in a way that is like real life… with feelings of “where do we go from here”.

If you love books about family, struggle, the happy moments, and the sad… then ‘Accidents of Marriage’ is definitely for you. I am very much looking forward to Meyers next book.

Pick up the book at any of the following locations, or in your local bookstore.
AMAZON
BARNES & NOBLE
GOODREADS

Also check her out on her website for more books, updates, and more!

Super Mom and Awesomely Nerdy Lady who can’t stand to sit still. I ran a successful online radio show that brought fans up close and personal with their favorite music, television and movie stars. Now, with my hilariously nerdy partners in crime, I have turned to my first love, BOOKS! A lover of books from a young age, I now always have a book on me no matter where I go. Books are my therapy. Twitter: @Kristin_Downer
Previous BOOK REVIEW: ‘Is Everyone Hanging Out Without Me?’ by Mindy Kaling
Next BOOK REVIEW: ‘Cut Me Free’ by J.R. Johansson