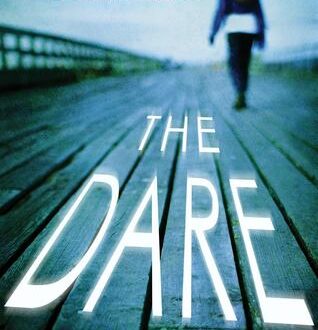 Calling all Pretty Little Liar fans! This book is right up your alley! ‘The Dare’ by Hannah Jayne gives you the suspense and thrill moments where you start to wonder if someone who should not be around anymore… is!

‘The Dare’ is the story of Brynna Chase, a young girl with a friend, Erica Shaw, she has known for years! They can’t even tell their clothes apart and have closets full of stuff that more than likely belongs to the other person. Inseparable! Until one late night beach rendezvous with friends that turns deadly! The two girls jump into the water of an area that has a rip-tide; the girls unaware. Erica never comes back up and her body isn’t found. Now Brynna has to move on with life and a new school. She is hoping for a fresh start, but can she get it? Or is Erica not really dead? Or possibly someone has decided the memory of Erica needs to live on in the form of torturing… and in some instances, almost killing Brynna. As Brynna tries to make new friends and start fresh she is haunted by the memory of that night and the idea that someone is clearly out to get her.

Almost sounds like a take on Pretty Little Liars, doesn’t it? I’m not saying Jayne copied the idea because there are very clear differences. It’s just a good comparison if you want to know what kind of story you are about to read.

Hannah Jayne did a great job with hooking the audience. She found a way to keep you guessing until the end. Her writing style puts you right into the mindset of a teenager and allows you to interact and relate to them in a way you wouldn’t if you are an adult. As an adult, I was a little worried about relating to the characters or getting into the story line centered around high school life and drama, but Jayne dragged me in. While sometimes I found myself yelling at the pages and telling the character what to do and to get help, it did occur to me that the behavior displayed is definitely that of a teenage mindset. Going to your parents is usually the last option after dealing with issues yourself or going to your friends.

Jayne clearly has a great mind on her and that showed as ‘The Dare’ played out. A definite read that is good for a rainy day in or laying out on the beach; something that won’t make you think TOO much, but definitely keeps you guessing and interested. A great job and great work to Hannah Jayne!

Super Mom and Awesomely Nerdy Lady who can’t stand to sit still. Delving into the online world I ran a successful online radio channel and blog that brought fans up close and personal with their favourite music, television and movie stars. Now, with my hilariously nerdy partners in crime, we are hiding our nerdyness no more! Twitter: @Kristin_Downer
Previous Book Review: ‘Our Interrupted Fairy Tale’ by Megan Williams
Next BOOK REVIEW: ‘Where She Went’ by Gayle Forman

BOOK TO MOVIE: The Boy in the Striped Pajamas

BOOK REVIEW: The Girl from the Chanel Islands by Jenny Lecoat